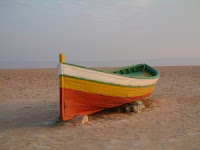 The people power movement has been celebrated throughout North Africa in recent weeks, but the resultant political unrest has also pushed many Tunisians to flee their homes. Some fear reprisal under a new political regime; others are simply concerned for their safety in an unstable political environment. Though the push for democratic change in Tunisia has been welcomed in Europe, not so the Tunisians fleeing political instability in their native land. European nations have been quick to apply a security rather than a humanitarian lens to the issue of North African migration.
As noted on the Immigration Prof blog, Italy declared a humanitarian emergency last weekend, referring to the estimated 5,000 Tunisians who have arrived on the Italian island of Lampedusa in recent weeks as a "Biblical exodus." The migrants are fleeing a state of lawlessness in Tunisia, where strikes and clashes have become commonplace and police protection is scarce. IOM officials described the migration as a "mixed flow", including both refugees and economic migrants.
Lampedusa, which is closer to North Africa than to Italy, has a native population of 5,000 and an immigration holding center designed for 850 people. While most have been moved to better-equipped migrant camps elsewhere in Italy, the 1,814 Tunisians who remain threatened a hunger strike yesterday rather than face return.
Last weekend, Italian Interior Minister Roberto Maroni (of the anti-immigrant Northern League party) asked the EU border patrol to step up controls in the Mediterranean, the EU to cover part of the cost of deporting migrants (to the tune of 100 million euros), and EU members to share the burden of accommodating them. On Tuesday, the EU offered fast-track money to Italy to assist with accommodation infrastructure, material aid and medical care, social assistance, legal aid, and language assistance.
The individual member states have not been quite so forthcoming. Austria, Germany, and France have all refused to come to the aid of the Tunisian migrants. On Monday, France said that it "will not tolerate any illegal immigration from Tunisia." Though the French government recognized that there might be refugees in the flow, it said there were very few such cases. Moreover, the French advocated a return to regular patrols along the coasts of North Africa to keep immigration levels as low as possible. On Tuesday, the German Interior Minister said, "we cannot solve all the world's problems."
While the EU appeared willing to take a stab at stepping up border controls, its bureaucratic rigidity has left it ill-prepared to do so. On Monday, Frontex, the EU agency focused on border security, said it was ready to assist with the Tunisian situation and indeed had sent two experts to Lampedusa, but could not yet get involved because it had not received a formal request from Italy for assistance. And the idea of increasing EU patrols in the Mediterranean through Frontex could take weeks as EU nations have to agree on personnel and equipment contributions to the mission.
To its credit, in addition to the aid to Italy, the EU announced a 258 million Euro aid package to Tunisia through 2013. Unfortunately some of these funds are earmarked for radar equipment and patrol boats for the Tunisian military -- presumably to prevent migrant outflows. After refusing Italy's request to put its armed forces on Tunisian soil in order to put an end to these migration streams, the Tunisian government itself has been enforcing European borders. Tunisian troops have already arrested between 1000 and 1500 people trying to flee; given that at least some of those in flight are refugees, encouraging such border closure appears contrary to international refugee law obligations. Even worse, the Tunisian coast guard was accused last week of ramming and sinking a ship containing 120 migrants headed to Italy; 5 died and 30 are missing. People power, undaunted by brutal security forces and dictators alike, may be no match for Fortress Europe.