(Delighted to welcome back alumna Anna Spain, who contributes this guest post) 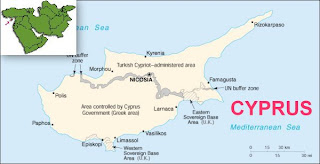 I am pleased to announce a new program on international dispute resolution that I’ll be helping to teach this summer. It will take place in Cyprus, a venue that provides a unique and important context for the study of international dispute resolution.
In 1960, Cyprus became an independent nation after being under British colonial rule, thus aggravating the ongoing dispute between Turkey and Britain over the territory. Hostilities in 1963 and 1974 ultimately resulted in Turkish Cypriots declaring their independence as the Turkish Republic of Northern Cyprus from the Republic of Cyprus. (This history is the subject of a post yesterday as well as many prior IntLawGrrls posts.)
Today, the island nation is divided de facto into these two communities by an UN-administered buffer zone. The UN Peacekeeping Mission (logo below left) has served to maintain the ceasefire on the island since 1964 under the mandate of UN Security Council Resolution 186. Issues pertaining to property, territory, governance and the Turkish vs. Greek cultural identities remain, although economic development has led to increased cooperation in recent years.
In 2002, efforts to resolve the dispute began under the Annan Plan, which was formally presented to the parties by UN Secretary-General Kofi Annan on March 31, 2004. Although the Plan, which proposed terms to adjust the territory and address outstanding property disputes, was not accepted by the parties at that time, future efforts are being considered.

Our innovative study abroad program is inspired by this history.
It’ll be taught by Cesare Romano, Professor of Law at Loyola Law School and Director of the Cyprus Program and me. We will strive to understand the complex factors contributing to this and other international disputes around the world. As detailed here, we will spend one week at the University of Nicosia in the southern part of the island of Cyprus, and two weeks at Eastern Mediterranean University in the north. Participants will also visit the UN Peacekeeping Mission.
The program is designed to offer a comprehensive study of
► International dispute resolution mechanisms; and
► How those mechanisms are used to manage international conflict and to resolve international legal disputes.
The three-week, four-credit course will cover a broad spectrum of topics, including international law, the use of adjudication in international courts and tribunals, negotiation, mediation and other peacebuilding approaches.
I am delighted to be involved in this initiative, both professionally and personally.
The situation in Cyprus offers me an opportunity to expand my research and scholarship about how process, through international dispute resolution, can contribute to resolving conflict and influencing state-behavior. Identity-based conflicts and intra-state conflicts, like the one in Cyprus, are on the rise, expanding international disputes beyond the traditional inter-state context. As a result, new approaches are required. (See my recent article discussing this, Integration Matters: Rethinking the Architecture of International Dispute Resolution.) This initiative will also draw upon my prior experiences as an attorney-adviser at the U.S. Department of State – working with the UN Compensation Commission and the Iran-U.S. Claims Tribunal – in considering ways to approach the property disputes that are a contributing factor to the situation on Cyprus.
On a more personal note, I began my work in this field 17 years ago when, as a high school student, I helped mediate racial tensions between black and white members of my community. I understand first-hand how sensitive and challenging addressing identity-disputes can be. I also believe that progress is possible, and I look forward to sharing this optimism with those who join us in Cyprus this summer.
This program is open to law students as well as members of the general public. Applications are due April 8, 2011. For more information or to apply, visit here.
by Anna Spain at 7:00 AM