Many thanks to IntLawGrrls for the opportunity to contribute a guest post.

Accountability Counsel filed a complaint on behalf of three affected communities in November 2010 based on a wide variety of human rights and environmental problems associated with the Project. The communities received no information about the Project, were not consulted, impacts on indigenous groups were not considered, and there were insufficient plans to address and mitigate social and environmental impacts, including destruction of 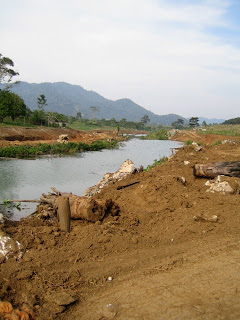 important waterways that communities depend on for household use, consumption and fishing. (The picture at right shows some of the project construction that is destroying the affected communities' creek, Arroyo Sal). The communities also have had problems with land acquisition and the lack of a required, local grievance mechanism to raise their concerns. The community complaints are here and here.

We submitted the complaint to the U.S. federal agency that financed the project, the Overseas Private Investment Corporation (“OPIC”). (The picture below left depcits the indigenous Chinanteco community of Cerro de Oro voting to file a complaint). OPIC invested $60 million in U.S.-based Conduit Capital Partners, LLC, the key Project sponsor. The complaint is the fifth ever filed with the internal OPIC Office of Accountability, which U.S. Congress created in 2005 so that complaints like this one can be addressed in a fair and objective manner. The complaint seeks the Office’s assistance with resolving community concerns about the project through the problem-solving function, and seeks to hold OPIC accountable for its failures to uphold its own policies through the compliance function.

Before the Office of Accountability even initiated its problem-solving role, based on the information in our complaint to the OPIC Office of Accountability, members of the Oaxacan State Congress launched an investigation into the Project. Their Commission convened a meeting last Thursday, February 17th, where the company, communities, and governmental officials all presented their views. At the meeting, the communities demanded suspension of the Project by Monday, February 21st, and the

Congressional Commission supported the community demand. The company, wisely realizing that continued construction was exacerbating the situation, called me on Friday to announce at least temporary suspension of work.

Now, with construction of the Project suspended, the communities and the company will be able to return to the OPIC Office of Accountability process to begin dialogue. We hope that this largely untested accountability mechanism will have a constructive role in the process. The complex dynamics at work here have created at least a temporary victory for the communities who were, until today, watching chemicals used in construction enter their drinking water and their livelihoods eroded. We hope the communities and company can reach a negotiated solution soon so that we can return to the portion of the complaint focused on OPIC itself – a U.S. federal agency that financed a project in vast non-compliance with OPIC’s own policies and procedures meant to protect people and the environment.

Accountability Counsel, a legal non-profit founded in San Francisco in 2009, aims to defend the environmental and human rights of communities around the world by creating, strengthening, and using accountability systems. In particular, we specialize in non-judicial grievance procedures related to international finance and development. We accomplish our mission by:

by Natalie Bridgeman Fields at 5:28 AM

Quick update: as of Feb. 24, 2011 the project has been "indefinitely suspended."