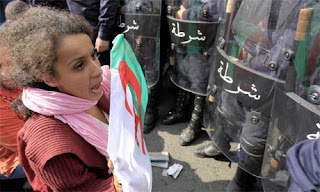 ALGIERS – In the wake of Friday's historic events in Cairo, over 1,000 peaceful demonstrators defied a ban on protests in Algiers on the Place de 1er Mai on Saturday.
The goal of the National Coordination Committee for Change and Democracy, the organisers of what was supposed to have been a march to Martyr's Square, was to call for an end to the 19-year state of emergency, for democratic freedoms, and for a change in Algeria's political system. Invigorated by Cairo's great event, this Saturday in Algiers they chanted slogans like "Djazair Horra Dimocratia" ("A free and democratic Algeria"), "système dégage" ("government out") and indeed,

There were small echoes of Egypt. Thousands of police in full riot gear painted the square blue in their uniforms, attempting to occupy the space and prevent the demonstration, yet the protestors remained, for hours risking arrest and beatings, shouting slogans and singing effervescently. A large group of young men, with the obvious cooperation of the police, entered the scene violently, chanting in favour of President Bouteflika (in power since 1999) and attempting to provoke fights with the protestors. (This was so reminiscent of Cairo, that for a moment, one half-expected a charge of men riding camels like in Tahrir Square.) At one point, these youths rushed the bench where I stood taking photographs with journalists, and we all toppled to the ground. Later, the pro-government provocateurs started throwing large stones.
The single most moving part of the day was the women's demonstration. A group of about 50 of the many women present – a few young women in hijab, many other young women in jeans, older, seasoned feminist activists wearing khaffiyehs and dresses – took up position next to the bus station at 1st of May Square holding a large Algerian flag. (credit for Reuters/Zohra Bensemra photo above)
One of these women, prominent psychologist Cherifa Bouatta (below right), told me on Friday as we watched the celebration in Cairo:

'I have been waiting for this for years. This is the beginning. From the years of terrorism [the 1990s] and what came after, everything seemed lost. Our hopes for a just society were dying. But now the possibilities are fantastic.'

On Saturday in 1st of May Square, she and the other women explored those possibilities. They occupied the street; they called for profound political change; they ululated (what Algerians call "pousser les youyous"; a high-pitched glottal chanting); they sang "Kassaman", the national anthem, and "Listiqlal" (independence), a song of the anti-colonial movement that freed the country from French rule in 1962 at the cost of a million martyrs. Most importantly, they refused to cede to the police. The pro-Boutef youth repeatedly confronted them, and even began shouting in favour of an Islamic state at one point as a confused riposte to the women.
The most surreal moment came as I watched the unyielding female activists attacked by a group of young policewomen in pants and boots – their own career paths only imaginable thanks to the hard work of some of the very women activists they hit and shoved. A young policewoman, the age of one of the students I teach, slapped me for taking a picture as this occurred. The women protesters' only "crime" had been to stand peacefully on the sidewalk of their own capital city singing the national anthem and calling for democracy.
Reportedly, as many as 350 were arrested during the day. Many were roughed up, including the prominent, 90-year-old lawyer Ali Yahia Abdennour, who is the honorary president of the Algerian League for the Defence of Human Rights (LADDH). Cherifa Khaddar, the redoubtable human rights activist and president of Djazairouna, an association of the victims of the fundamentalist terrorism of the 1990s, whose brother and sister were brutally murdered in 1996 by the Armed Islamic Group (GIA), was arrested twice. I watched

in horror as policewomen manhandled her – unfortunately, not an oxymoron.
Just before she was arrested the first time, Khaddar (left; credit) was attacked by a group of the young pro-government "protesters", some of whom attempted to pull her clothes off while another attempted to simulate sex with her. A policewoman dragged her away from this melee, only to help a group of male cops throw her to the ground and arrest her, rather than the perpetrators. Later on, at the police station, she found herself in a cell with 20 other women. Together, they continued the protest, chanting and singing:

'My brothers do not forget our martyrs. They are calling you from their tombs. Listen to their voices, you free ones.'

The police became enraged and attacked the women in the cell, dragging one away by her hair. Khaddar was later released.
The situation is fluid. As the protest waned, the square was taken over by a large group of mostly young male protesters, many from the surrounding neighbourhood. Some of them had previously chanted pro-government slogans and insulted the women demonstrators, but now took up anti-government slogans themselves, talked supportively with the freed Khaddar and challenged the police alone. Hundreds of riot police then brought out their guns, marched in formation and shut down the square altogether. It looked like a scene out of the Costa Gavras film "Z".
I hope that what happens in Algeria in the coming period will be watched carefully, notwithstanding the understandable preoccupation with events to the east in Egypt. (Prior IntLawGrrls posts.) The contexts are different, but the struggles are the same. Moreover, the brave Algerian activists of 1st of May Square – women and men, young and old – also deserve solidarity and support on the road ahead. Algerian writer and journalist Mustapha Benfodil said that this demonstration's goal was to turn 1st of May Square into an Algerian Tahrir Square, and that what occurred on Saturday was a very important step in that direction. But he noted that much work remains to be done to that end.
Clearly, the wall of fear needs to be broken down here – perhaps a harder task than elsewhere, given the terrible violence of the 1990s that killed as many as 200,000 people and terrorised the entire society. The opposition needs to be united and organised. Additionally, activists need to build critical links with broader segments of the society to achieve the political change so clearly needed in the country and which the police overreaction only underscored – change that Tunisia and Egypt have proven to be entirely possible.
For now, perhaps it is more accurate to say,

(Cross-posted at the Guardian)