(Occasional sobering thoughts.) The United States, France, and other countries intervened militarily against Libya's government yesterday -- the 8th anniversary of the U.S.-led invasion of Iraq.
Participation by France (under President Nicolas Sarkozy) departed from the earlier script, when France (under President Jacques Chirac) vocally opposed intervention and so thwarted the United States' bid for U.N. Security Council authorization.
This time around, France pushed earlier and hard for a Security Council resolution. Some officials in the United States initially resisted. But as predicted nearly a month ago by our Opinio Juris colleague Chris Borgen, a tweet heard 'round the world (below center, by Anne-Marie Slaughter, who just finished a 2-year stint as the head of policy planning at the State Department) seemed to set the stage for support by Secretary of State Hillary Clinton and, eventually, President Barack Obama. 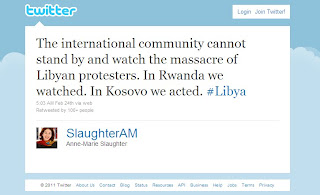 Five of the 15 Security Council states, including China, Russia, and Germany, abstained from Resolution 1973, which was billed as a no-fly resolution during early negotiations, yet included this paragraph authorizing greater intervention:

Protection of civilians
4. Authorizes Member States that have notified the Secretary-General, acting nationally or through regional organizations or arrangements, and acting in cooperation with the Secretary-General, to take all necessary measures, notwithstanding paragraph 9 of resolution 1970 (2011), to protect civilians and civilian populated areas under threat of attack in the Libyan Arab Jamahiriya, including Benghazi, while excluding a foreign occupation force of any form on any part of Libyan territory, and requests the Member States concerned to inform the Secretary-General immediately of the measures they take pursuant to the authorization conferred by this paragraph which shall be immediately reported to the Security Council; ....

Hence yesterday's Tomahawk strikes on Libyan air defense systems. Hence, too, today's complaint from an advocate of the no-fly zone -- the leader of the Arab League said "the use of force was excessive following an overnight bombing campaign that Libya claims killed at least 48 people."
The Security Council-endorsed actions are taking place in the name of civilians. A noble cause, yet one without end. If Libya, why not other countries whose governments harm their own people? To name one, why not Côte d'Ivoire, site of tragic deaths amid months-long post-election violence?
As made explicit in the preamble to Resolution 1973, the Security Council resolved to act in the name of the fledgling doctrine of responsibility to protect. The Council's choice of Libya, to the exclusion of other global trouble spots, exposes once again the unsettling selection bias inherent in current conceptualizations of that doctrine.
Unsettling too is the notion of a 3d (or 4th, depending on how one counts AfPak) armed conflict in which the United States is engaged -- and in which civilian deaths are likely to occur even in the course of efforts to protect civilians.
While waiting to see what transpires on the Libyan front, it is due time to review casualties since our last post, 16 weeks ago, in the long-running conflicts in Afghanistan and Iraq.
► In Afghanistan, "[t]argeted killings of civilians in Afghanistan doubled" in 2010, according to an annual report recently issued by the United Nations. Specifically, there was "a 15 percent increase in the number of civilians killed to 2,777 -- continuing a steady rise over the past four years" in the nearly decade-old conflict.
The U.S. Department of Defense reports that in Afghanistan, coalition military casualties stand at 1,505 Americans, 360 Britons, and 507 other coalition servicemembers. That's an increase of 89, 15, and 23 casualties, respectively, in the last 16 weeks. The total coalition casualty count in the Afghanistan conflict is 2,372 service women and men.
► Respecting the Iraq War launched 8 years ago this weekend -- a milestone observed by scattered protests --Iraq Body Count reports that between 100, 051 and 109,318 Iraqi women, children, and men have died in the conflict in Iraq since the U.S.-led invasion in March 2003. That represents an increase of between 1,030 and 1,224 persons since 16 weeks ago. According to

the U.S. Defense Department, 4,440 American servicemembers have been killed in Iraq, representing 11 servicemember deaths in the last 16 weeks. (As posted, U.S. troops are the only foreign forces remaining in Iraq.)

would u plz tell u about the legal meaning of the Paris meeting? My Email is interlaw@sina.com. Thanks a lot.