In January, a delegation from the RFK Center for Justice and Human Rights, led by prominent Sahrawi activist Aminatou Haidar, 2008 recipient of the RFK Center's Human Rights Award, found evidence of human rights abuses that Moroccan government forces have inflicted on civilians in Western Sahara. (credit for 2009 Borja Suarez/Reuters photo of Haidar) Regularly referred to as the "Sahrawi Gandhi," Aminatou is one of the most prominent human rights defenders in Western Sahara -- as IntLawGrrls have posted, a region in northwest Africa (below left) occupied by Morocco.
Our delegation comprised Lynn Delaney, Executive Director of the RFK Center, Advocacy Officer Mary Beth Gallagher, and myself, the Director of the Center for Human Rights.
Many of our meetings focused on abuses that ensued from last November's dismantling of the Gdaim Izik protest camp, which houses 12,000 displaced Sahrawis, and the aftermath in the following weeks and months. We interviewed dozens of people who were victims of abuse, torture, and imprisonment, along with witnesses and family members.

We also met with representatives of the United Nations Mission for the Referendum in Western Sahara, which has operated in the region since 1991. MINURSO was created to oversee the ceasefire between Morocco and the Polisario Front (the representative of the Sahrawi people) and to implement a referendum on self-determination. Two decades later, this referendum has not occurred, and widespread human rights abuses by the Moroccan government persist. MINURSO remains the only modern-day peacekeeping mission in the world without a human rights mandate.
Our accounts have been compiled into a new report. Entitled Western Sahara: Accounts of Human Rights Abuses Persist in Wake of November Unrest, it is available, in English, French, and Spanish, here.
The report reinforces the need for international human rights monitoring in West Sahara.
It includes several stories of human rights violations, including that of 15 young men who disappeared in 2005 and have yet to be accounted for. Their families told us that repeated complaints to government officials have led nowhere. When we inquired about the case, the government told us that their family members had "drowned in the sea."
We were told about human rights defenders who were sent to a military prison hundreds of miles away from their homes and brutally beaten. Lawyers and recently released detainees spoke about the use of fraudulent evidence and forced confessions, and about the failure to treat serious medical conditions in prisons -- all acts that violate Morocco's own laws. 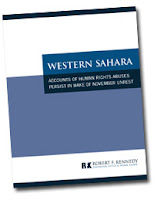 Looking for all sides of the story, we spoke to the Moroccan government as well. We were told unequivocally that the government does not use torture and that any reports of torture would be duly investigated. But defense lawyers told us they have repeatedly lodged complaints, only to have them ignored.
This report will be disseminated to lawmakers, advocates, and civil society in order to encourage greater protection of human rights in Western Sahara.