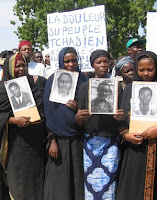 -- Jan Arno Hessbruegge, who works as a legal advisor for the Office of the U.N. High Commissioner for Human Rights, in a personal-capacity ASIL Insight on the November 2010 judgment of the Community Court of Justice of the Economic Union of West African States in Hissein Habré c. République du Sénégal. We've posted here, here, and here about the court of ECOWAS, a regional organization whose members include not only Senegal, but also Benin, Burkina Faso, Cape Verde, Côte d'Ivoire, Gambia, Ghana, Guinea, Guinea Bissau, Liberia, Mali, Niger, Nigeria, Sierra Leone, and Togo. Hessbruegge's Insight is skeptical about the reasoning of the ECOWAS Court in this case. And he rightly points out that it raises the potential for conflicting judgments in cases involving former Chadian dictator Habré -- not necessarily the 2009 decision of the African Court of Human and People's Rights about which we've posted, but rather the eventual judgment in Questions relating to the Obligation to Prosecute or Extradite (Belgium v. Senegal), pending before the International Court of Justice. (credit for © 2005 Madjiasra Nako/IRIN photo of "[w]idows protest[ing] in the Chadian capital, N'Djamena, demanding the extradition of Hissène Habré to Belgium to face charges of crimes against humanity")