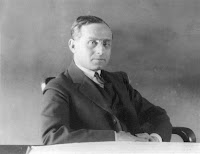 He played a small but meaningful role in this unique gathering of princes, presidents, and kings-in-waiting, sitting down face-to-face with Emir Faisal ibn Husayn, who would briefly be king of Syria and then of Iraq. Faisal's translator and adviser was none other than T.E. Lawrence, fresh from the exploits in insurgency that earned him the nickname Lawrence of Arabia. Working with Lawrence, Frankfurter negotiated an exchange of letters expressing mutual support for the national hopes of Jews and Arabs alike -- a kind of hopeful entente that prefigured later cooperation between the Zionists and the Hashemite Kingdom of Jordan.

-- A story of the bit part that Felix Frankfurter (above left) played in the 1919 Paris Peace Conference (prior posts) that led to the Versailles Treaty and many other post-World War I agreements. Recounted at p. 30 of in Scorpions: The Battles and Triumphs of FDR's Great Supreme Court Justices (2010), by Harvard Law Professor Noah Feldman. Frankfurter was among those those "greats," according to Feldman. The others (4 out of 9 FDR appointees) were Robert H. Jackson, Hugo Black, and William O. Douglas. In Feldman's telling, the 4 were instrumental in the entrenchment of theories of constitutional interpretation that persist to this day: respectively, judicial restraint, pragmatism, originalism, and legal realism. (credit for circa 1927 photo of Frankfurter, then a Harvard Law professor)
by Diane Marie Amann at 7:00 AM