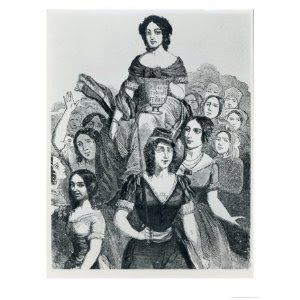 On this day in ...
... 1894, Jeanne Deroin died in England, 88 years after she'd been born into a working-class family in Paris. An embroiderer by trade and "an ardent then disillusioned republican" by politics, Deroin embraced Saint Simonianism in the 1830s and 1840s. Among her inspirations was IntLawGrrls foremother Olympe de Gouges (prior posts). With the ferment of 1848, Deroin became an advocate for socialism and women's rights. A journalist as well as an activist, she was imprisoned for "political conspiracy" in 1850; on release, she eventually fled to England and resumed publishing women's rights tracts. (credit for image, from fine-art print entitled "Women Carrying Jeanne Deroin (1805-94) in Triumph, from 'Les Femmes Celebres'")