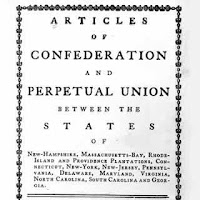 On this day in ...
... 1781 (230 years ago today), 16 months after sending it to individual states for approval, the Continental Congress of the United States ratified the founding charter known as the Articles of Confederation. The Articles would remain America's governing document until 1789, the year of effect of the U.S. Constitution, an instrument that, despite initial intentions, overhauled the structure of U.S. government.