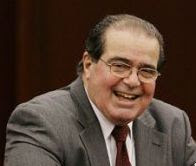 On this day in ...
... 1936 (75 years ago today), Antonin Scalia (prior posts) was born in Trenton, New Jersey. Following unanimous approval of the U.S. Senate, he became an Associate Justice of the Supreme Court in 1986. In the quarter-century he's served, he's become noted for an outsized personality and for espousal of a version of originalism that precludes recognition of many individual rights, such as the right to be free from criminal punishment for same-sex intimacy and the right to choose whether to terminate a pregnancy. (credit for AP photo)