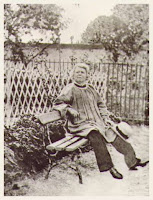 On this day in ...
... 1822, a daughter, Marie-Rosalie, was born in Bordeaux, France, to a mother who was a piano teacher and a father who was a landscape and portrait artist as well as a follower of "Saint-Simonianism, a Christian-socialist sect that promoted the education of women alongside men" and "prophesied the coming of a female messiah." Several of the couple's children would become painters; most renowned was this daughter, known as Rosa Bonheur (left). Especially noted were her paintings of animals (right) (not to mention the menagerie of four-footed subjects

that she maintained). "A professional artist with a successful career, Bonheur lived in two consecutive committed relationships with women", preferred to wear men's clothing, and is considered a feminist of her time.