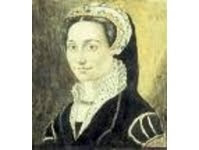 On this day in ...
... 1316 (695 years ago today), Marjorie Bruce (right) died. Her mother had died at 19, giving birth to her. When Marjorie was 9 her father, Robert, would become king, and she princess, of Scotland. Within months family fortunes would reverse, and Britain would imprison Marjorie in a convent. Eventually set free, she was given in marriage as a prize to another warrior. (image credit) While pregnant she fell from a horse and died during the Caesarean surgery that delivered her child. Like her own mother, she was 19. Her son, Robert II, would become king of Scotland, and most of UK's royalty are descended from her.