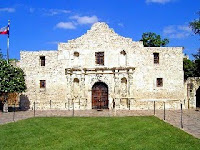 On this day in ...
... 1836 (175 years ago today), Mexican troops stormed the Alamo, an old Spanish mission/fortress in San Antonio, in which supporters of an independent Texas had been under prolonged siege. Heavy casualties resulted; all the Texans died. (photo credit) The loss of the fort became a rallying cry in subsequent battles, and Texas became an independent republic a couple months later. It would become a constituent state of the United States in 1845.