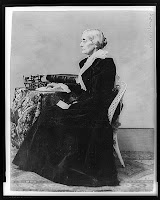 On this day in ...
... 1884, Susan B. Anthony testified before the Judiciary Committee of the House of Representatives in support of a constitutional amendment that would extend the right to vote to women. She began:

We appear before you this morning…to ask that you will, at your earliest convenience, report to the House in favor of the submission of a Sixteenth Amendment to the Legislatures of the several States, that shall prohibit the disfranchisement of citizens of the United States on account of sex.

As detailed in posts available here, such an amendment -- the 19th -- would not be ratified until 1920. (credit for photo of Anthony, an IntLawGrrls foremother, circa 1880-1906) Food for thought this 100th anniversary International Women's Day.