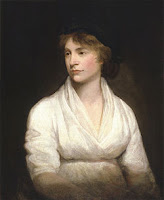 Read Mary Wollstonecraft.
That advice was at the core of the keynote speech that Amartya Sen delivered yesterday to open the 105th Annual Meeting of the American Society of International Law, under way through Saturday in Washington, D.C. (Prior posts available here.)
In his address on the history and nature of human rights, Sen, a Harvard professor and winner of the 1998 Nobel Prize in economics, Sen referred frequently to Wollstonecraft (right). (image credit)
As we've posted, Wollstonecraft, an IntLawGrrls foremother, was born in 1759 in London. She was a noted theorist and intellectual during her short life -- she died in 1797 giving birth to Mary Shelley, future author of Frankenstein. Wollstonecraft often is categorized as a feminist, but Sen described her more generally, as

'the most neglected thinker of the Enlightenment period.'

Wollstonecraft's works included A Vindication of the Rights of Women, A Vindication of the Rights of Men, in a Letter to the Right Honourable Edmund Burke, occaisioned by his Reflections on the Revolution in France, and and various travelogues. Insights within these works, Sen said, include:
► Demonstration that rights were not dependent on legislation, but rather could serve as a precedent inspiration for legislating human rights; and
► Emphasis on the importance of rights within the family.
Sen further noted the "very strong normative claim" about rights made by another Englishwoman about whom we've posted: suffragist Christabel Pankhurst (below right). In 1911, nearly 2 decades before British legislation would accord women the vote, Pankhurst said:

'We are here to claim our rights as women. Not only to be free, but also to fight for freedom.'

As the discussant at yesterday's lecture, our colleague and Princeton Professor Kim Lane Scheppele, said, this emphasis on the capabilities of individuals to open doors to opportunities is central to Sen's thinking -- thinking that, in her view, could benefit from greater engagement with the significance of law in effecting human rights.
by Diane Marie Amann at 6:04 AM

Completely agree about reading Wollstronecraft. She change my life.

She changed mine too! I've set up a blog in her honour, A Vindication of the Rights of Mary, and as I'd been meaning to write up Sen for some time, I've used your post as the stimulus to do so. Please have a look!
http://avindicationoftherightsofmary.blogspot.com/2011/03/amartya-sen-tells-international-lawyers.html