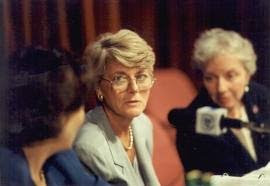 Geraldine A. Ferraro, who passed away this weekend, is a symbol of women’s rights advocacy.
As America’s first female candidate of a major party for vice-president, she broke barriers. But readers of IntLawGrrls may not know how actively and directly she influenced women’s rights issues in the international legal context as well.
Appalled by televised reports about the use of rape as a weapon of war by Serbs in the Bosnian conflict, Gerry contacted Madeleine Albright to ask what the new Clinton Administration was doing about it. She was immediately asked to join the Administration’s first delegation to the UN Commission on Human Rights in Geneva, in February 1993, where she helped convince Member States to adopt a separate resolution addressing rape in war.
As Gerry told it, accomplishing this task required her to conduct gender-sensitivity training, too. For example, she found herself telling the male diplomats from the Islamic Conference that they needed to recognize that such sexual violence was not so much an insult to THEIR ‘honor’ (which was all they were prepared to declare) but rather a very real lasting physical and psychological abuse of the women who were victimized. Gerry emphasized that something serious had to be done by the Commission to name it, stop it, punish the perpetrators and aid the survivors. As a result, the Commission adopted a resolution that called for ‘joint and separate action to end this despicable practice,’ as well as for investigations, accountability and assistance to the victims.
Later that year, the protection of women’s rights was affirmed as a major focus of the UN World Conference on Human Rights in Vienna – only a few hundred miles from Bosnia itself.
Gerry was then appointed to head the US delegation to the Commission on Human Rights in Geneva as Ambassador. After she took the reins of the delegation for its 1994 session, the UN created the post of Special Rapporteur on Violence against Women, with a mandate to investigate and intervene to stop abuses worldwide. Additionally, at Gerry’s direction, attention to women’s rights and a gender perspective was incorporated into UN resolutions authorizing many other investigations into human rights abuses.
The following year, after setbacks at a spring Preparatory Conference (“Prepcon”), women advocates realized it was urgent to have strong US leadership on women’s human rights issues as a part of the negotiating team for the upcoming Beijing World Conference on Women, scheduled for September 1995. The World Conference was under attack from various quarters – representatives of the Vatican and Islamic countries had worked vigorously at the Prepcon to place large portions of the draft Platform for Action into brackets (meaning they would remain open to negotiation) and had added proposals challenging the universality of human rights. Some opponents of the Conference offered the concept of ‘human dignity’ as an alternative to that of equal rights (i.e., women might have dignity but may not have equal rights). Others demanded recognition of parental rights and duties rather than the human rights of women and girls, and questioned the use of the word gender. The topic of reproductive rights was challenged directly in ways seeking to undermine advancements stemming from the October 1994 Cairo World Conference on Population and Development.
Gerry was appointed a vice-chair of the US delegation to Beijing in June 1995 and reached out immediately to NGOs and experts alike to work with her and tackle the issues one by one. She engaged in a wide range of informal contacts to try to improve the diplomatic atmosphere—and to reach agreements that affirmed rather than destroyed women’s universal rights. Ensuring a successful outcome in Beijing required her to engage with critics at home, as well as to interact with the representatives of the Vatican and Islamic states from Iran to Sudan. Conference language affirming universality of women’s human rights was threatened by other proposed language that would have both endorsed cultural relativity and emphasized national sovereignty, in particular, through repetition of a key footnote that had ‘saved’ the Cairo conference by encouraging each country to interpret the rights any way it wished. In the end, Gerry Ferraro succeeded in maintaining a US position that preserved the emphasis on universality of women’s rights for all, and concentrated on ensuring equal rights for women.
Hillary Clinton’s remarkable speech at the Conference fixed in delegates’ minds the concept that “women’s rights are human rights” and that they are not something different, inferior, or diminished as compared to other human rights.
The Beijing Declaration and Platform for Action went on to affirm that violence against women was not merely an ‘obstacle’ to equality and peace as had been stated earlier in the 1980 Copenhagen World Conference on Women, but also an abuse that impaired and violated the enjoyment of human rights by women. It defined violence against women broadly – as a phenomenon occurring in public and in private – that had to be prevented, outlawed and punished. The document calls for reporting and monitoring of violations, investigations and prosecutions of perpetrators, due diligence by governments and accountability. The document identifies rape in armed conflict – the issue that spurred Ferraro to engage with the UN’s human rights bodies – as a war crime and under certain circumstances as a crime against humanity or act of genocide. The Beijing World Conference advanced women’s rights both conceptually and politically.
Gerry Ferraro, who was born on Women’s Equality Day (August 26), could claim a victory for the ideas, strategies, and ongoing efforts to bring women’s human rights issues into the

mainstream of UN human rights bodies and world attention. Here, as in her unprecedented political candidacy, her efforts and achievements strengthened the position of all women.