(Delighted to welcome back IntLawGrrls alumna Pamela Merchant, who contributes this guest post) 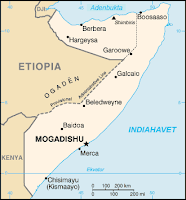 I am pleased to update you on a recent development in Yousuf v. Samantar, a human rights case that five survivors of torture brought in 2004 against General Mohamed Ali Samantar, who was Minister of Defense in Somalia (left) during the brutal Siad Barre regime.

On February 15th, the U.S. District Judge Leonie M. Brinkema ruled that this former Somali offical is not immune from suit.

This ruling in the Eastern District of Virginia clears a legal hurdle that we have been contesting for years, including at the U.S. Supreme Court.

Last June, the Supreme Court held that General Samantar was not entitled to immunity under the Federal Sovereign Immunities Act, but left open the question of whether he is entitled immunity under the common law. (Prior IntLawGrrls posts available here.) Last month's district court ruling settled that question by deferring to a statement from the State Department which unequivocally declared that General Samantar is not entitled to any immunity from suit.

The intervention in the Samantar case by the State Department is particularly significant because the United States only occasionally intervenes in litigation, and very rarely intervenes to claim that a defendant is not entitled to immunity.

The ruling ensures that our march towards accountability will continue. To learn more about the case, filed by the San Francisco-based Center for Justice & Accountability, for which I serve as Executive Director, and pro bono co-counsel Akin Gump Strauss Hauer & Feld LLP, please click here.