The twin natural disasters that struck Japan this month, earthquake and tsunami, left a trail of devastation in their path. Entire villages were lost. The death toll currently stands at more than 8,000 but is expected to rise much higher (more than 13,000 are missing). (Prior posts here and here.)
Even as survivors struggle for shelter, warmth 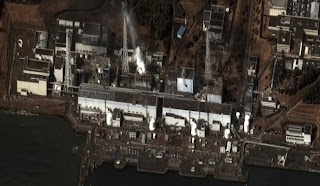 and food, the natural disasters are being rapidly overshadowed by the unfolding disaster at Japan's Fukushima Daiichi Nuclear Power Station. (right) (photo credit)
The key difference is that the nuclear disaster didn’t have to happen.
The earthquake, the tsunami, and the nuclear meltdown are all wrapped up together right now as one big human tragedy. But it is important not to blur the lines between risks that are inherent to living on planet earth, and risks that we have created for ourselves. Natural disasters like earthquakes, hurricanes or tsunamis are woven into the very fabric of the earth’s geological systems. There is no way to avoid them, though obviously we can take steps to minimize their impacts.
Anger after Hurricane Katrina was not directed at the hurricane for forming and coming ashore, but at the federal, state and local governments for failing to prepare and respond adequately, and at corporate priorities that devastated Louisiana’s (protective) wetlands in order to facilitate

shipping. (left) (photo credit) But for those human decisions—to channel the Mississippi in a fashion that prevented soil accretion; to cut channels through the marshes; to underinvest in the poorer parts of New Orleans; to neglect adequate evacuation planning—the natural disaster might never have become a human catastrophe.
Environmental disasters, by contrast, are catastrophes that flow directly from human-created risks.
In Japan, Reactor #3 may already be releasing MOX (mixed oxide), and all six reactors at the site are compromised, with at least three in partial meltdown. One of the most surprising aspects of this disaster has been our collective inability to get accurate information about the quantity of radiation that has been released, and how dangerous it might be. Turns out the radiation detectors were dependent on the same sources of power as the reactor cooling system, making them unavailable just when they matter most. While it may be unclear how much radiation has been released, both the Japanese government and Tokyo Electric have acknowledged that the released radiation is potentially fatal.
How does this disaster fit with industry assurances that nuclear power is safe and clean? It turns out the roots of this crisis date back to a 1973 decision by the Atomic Energy Commission (predecessor agency to the Nuclear Regulatory Commission) that

'the environmental effects of the uranium fuel cycle have been shown to be relatively insignificant.'

In 1978, the U.S. Supreme Court upheld this decision—shutting the door to rigorous assessment of the environmental threats from spent nuclear fuel. At issue in the case, Vermont Yankee v. NRDC, was the AEC’s fuel cycle rule—which had concluded that the environmental effects of spent fuel rods would be so negligible that they could safely be disregarded. At a 1973 hearing on this fuel cycle rule, environmental groups raised the question of what would happen if a disaster caused the water cooling system for a spent rod storage facility to fail. Speaking for the agency, Dr. Frank Pittman responded that it would take a week for the cooling water to boil away, allowing time for “various corrective actions” to be taken. These corrective actions remained conveniently unspecified.
Now we see why.
In the wake of the earthquake and tsunami, all six of the Fukushima Daiichi reactors lost power, and the backup generators failed. Thus these reactors were left in exactly the plight environmental groups predicted in the 1973 hearing. With the risks of catastrophic meltdown looming, Tokyo Electric found itself with neither the time nor the capacity to implement “various corrective actions.”
In desperation, the Japanese military resorted to dropping seawater via helicopter, and Japanese police re-purposed water cannons from riot control to reactor cooling.

These last-ditch measures harken back to BP’s similarly flailing attempts to cap the gushing Macondo well. (right) The BP oil spill, which killed 11 workers and created one of the worst environmental disasters in United States history, flowed from a lethal combination of corporate greed, operational hubris and lax government oversight. (photo credit) I suspect we’ll find the same to be true in Japan. In both disasters, the economic, human and environmental toll is still being tallied, but will be immense.
Japanese regulators will inevitably face the same question American regulators faced after the BP oil spill: Why are we finding out that there is no Plan B only after disaster has struck?
It is foreseeable that a nuclear plant in an earthquake zone might lose power, and that its auxiliary backup generators might fail, just as it was foreseeable that a blowout protector might fail and thus not stem a gushing oil leak. In fact, not only were these disasters foreseeable, they were actually foreseen. It has been three decades since scientists inside the Nuclear Regulatory Commission first warned of design flaws in the Mark I reactors used in Fukushima. And, the scenario unfolding there is precisely the situation that Dr Pittman so blithely dismissed in 1973 -- that of a catastrophic accident causing the kind of containment system used at the Fukushima Daiichi facility to fail, subjecting everything and everyone nearby to dangerously high radiation. Similarly, almost a decade ago the Coast Guard began warning (p. 22-23) that oil companies were not developing adequate clean-up technology to keep pace with their newly acquired deep drilling capacities.
Yet, those warnings fell on deaf ears.
In both situations, regulators charged with protecting the public and the environment willingly accepted industry assurances not only that disaster would not happen, but also that it could be easily managed if it did. The corporations seeking regulatory approval made safety claims they could not back up, and the regulators too readily went along. This corporate equivalent of “don’t worry your pretty head about it” infects virtually every industry—leading to a dearth of worst case scenario planning. The local communities and the environment bear the brunt when things go disastrously awry.
It is the self-inflicted nature of the wounds that makes environmental disasters particularly galling.
► Yes, it was BP that cut corners in drilling the Macondo well.
► Yes, it is Tokyo Power that stored more than 11,000 spent rod assemblies at the Fukushima Daiichi site. (Incidentally, there are 23 boiling water nuclear reactors in the United States that share the same Mark I containment system design as the crippled Japanese reactors.)
► And yes, the corporate actors in charge of those facilities made these choices with an eye toward profit.
► But, to the extent that we demand cheap and reliable energy, we are all complicit.
The line of causation between the glittering lights of the Ginza and the unfolding Fukushima Daiichi disaster is fairly direct, as is the connection between the millions of U.S. automobile owners and the BP oil spill. In a very real sense, our insatiable thirst for more energy to power our growing collection of televisions, air-conditioners and electric toothbrushes is also responsible.
That means that fixing the problem has to proceed on both fronts at once.
► Clearly government agencies need to be re-invigorated and re-inspired. We can no longer allow politicians to dismantle our regulatory agencies under the false pretense that private actors, pursuing private ends will voluntarily safeguard the public interest. We must adequately fund oversight and enforcement of existing safety and environmental laws, and improve them where they are lacking. We must also stop the revolving door that corrupts agency values and leads regulators to confuse industry interests with the interests of their true client—the public. A hollowed out government cannot ensure public safety.
► At the same time, we also need to learn to slake our energy thirst, and thereby remove the political justification (and economic incentive) for these risky gambles.