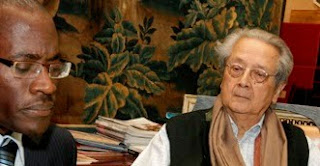 The above Potential Prosecution Puzzler asks:

What about this photograph signals that Laurent Gbagbo, the just-deposed Ivoirian President, is deeply worried about finding himself soon at The Hague, awaiting prosecution before the International Criminal Court?

The answer may be found in the name of the man to the right, more visible in this enlarged detail.
Al Jazeera English did not identify him, but suspect that I'm not the only one who did.
As other media reported, the man at right is Jacques Vergès (prior IntLawGrrls posts). Born 86 years ago in what's now Thailand, Vergès, a French national, is the go-to guy for persons accused of international crimes. Think Khieu Samphan, before the Extraordinary Chambers in the Courts of Cambodia. Klaus Barbie in the French national courts. And he's offered his services to Slobodan Milosevic, who decided to self-represent before the International Criminal Tribunal for the former Yugoslavia, and Saddam Hussein, whose family opted for other counsel in the trial before the Iraqi Special Criminal Court.
And so the Gbagbo defense prepares even before the Gbagbo prosecution begins.