(Delighted to welcome back alumna Pamela Merchant, who contributes this guest post)

Two clients of the Center for Justice and Accountability are scheduled to testify today in a deportation proceeding against a Salvadoran who has been charged with assisting or otherwise participating in the commission of acts of torture while he was El Salvador's Minister of Defense and a military general.

The clients, Dr. Juan Romagoza and Daniel Alvarado, represented by CJA lawyers Almudena Bernabeu and Carolyn Patty Blum, will appear in the Orlando, Florida, courtroom where the case is being heard against Eugenio Vides Casanova, charged with actions, done between 1979 and 1989 in El Salvador, that violate § 237(a)(4)(D) of the Immigration and Nationality Act.
It was eleven years ago that CJA, along with pro bono co-counsel from Morrison & Foerster and James K. Green, brought a human rights case against Vides Casanova and another Salvadoran general on behalf of our courageous clients, Neris Gonzalez, Carlos Mauricio, and Dr. Juan Romagoza. As IntLawGrrl Beth Van Schaack has written in posts available here, after a jury trial, the generals were ordered to pay $54.6 million to our clients for their role in their torture and other human rights abuses. The verdict was upheld by the U.S. Court of Appeals for the 11th Circuit in 2006.
Testimony expected in today's proceeding:
►Juan Romagoza will tell about the torture he suffered in the National Guard Headquarters during Vides' tenure as its Director.
►Daniel Alvarado, one of our clients in the lawsuit against former Vice Minister of Defense Nicolas Carranza, will testify about his torture while Vides was Minister of Defense. 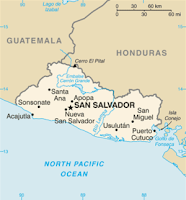 ►The government will also call Ambassador Robert White and Stanford University political scientist Terry Karl, both of whom testified in all four of CJA's Salvadoran cases.
Since the 2002 trial victory, CJA, the nongovernmental organization for which I serve as Executive Director, has been pushing the U.S. government to initiate a deportation case against the two generals, both of whom are lawful permanent residents of the United States.
In 2007 and again in 2009, Juan Romagoza and I testified before the Senate Judiciary Subcommittee on Human Rights and the Law. We demonstrated that Generals Garcia and Vides Casanova continued to enjoy safe haven in Florida. Senators Richard Durbin (D-Illinois) and Tom Coburn (R-Oklahoma) sent a series of letters to the Department of Justice and the Department of Homeland Security, asking why Generals Vides Casanova and Garcia continued to live freely in this country.
The importance of this deportation proceeding -- described yesterday in a New York Times story by Julia Preston -- cannot be overstated. It marks the 1st time that the Department of Homeland Security has used the new statutory provisions on torture against senior level commanders. The immigration judge's decision will hinge on important issues of law and fact. It can be anticipated that whatever the outcome, the case will be appealed to higher levels, and will set crucial precedent to be used in future cases against senior commanders for their role in allowing human rights abuses to be committed.
What is most crucial, from the perspective of CJA and our clients, is that the removal of Vides Casanova from the U.S. would represent the successful use of one more tool in the accountability arena and brings us one step closer towards justice for Salvadorians. This is why CJA has expended significant resources for legal reform and advocacy with the U.S. government, and support for our clients who are in Florida today to testify.