It's IntLawGrrls' great pleasure to welcome Beatriz Carta Wagman (left) as today's guest blogger.
Beatriz is studying for her LL.M. in international law at the University of Miami School of Law, where she participates in the Human Rights Clinic whose founding Director is IntLawGrrls' guest/alumna Caroline Bettinger-López. While at Miami, Beatriz has been awarded Dean’s Certificate of Achievement in International Law and in Human Rights Law. In her guest post below, Beatriz discusses the United States' immigration policy with respect to migrants from post-earthquake Haiti.
Prior to beginning LL.M. studies, Beatriz, who earned her J.D. cum laude from Florida's Stetson University College of Law, had practiced law in the areas of commercial litigation and securities arbitration.
As did IntLawGrrl Susana SáCouto, Beatriz wishes to recognize as her transnational foremother Sor Juana Inés de la Cruz (below right) (image credit). Beatriz writes of this 17th C. Mexican nun (prior posts), who is known as the 1st feminist of the Americas: 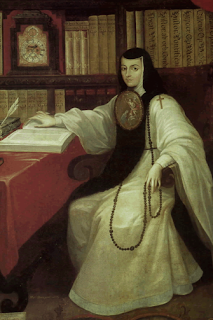 I have admired her since I took a Spanish American Literature Course in college and read some of her works. She was a woman ahead of her time who valued her intellectual pursuits. Her independent spirit and brazen choice to pursue her life of studies has been inspirational for me. For me she embodies the idea that a woman has a right and a choice to engage in intellectual pursuits. As a mother of two girls, I am thankful that they are able to take their education for granted, thanks in no small part to women like Sor Juana Inés de la Cruz.