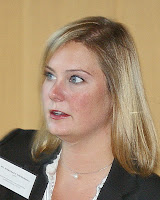 It is our great pleasure to welcome Margaret Zimmerman (right) as a guest blogger!
After having worked in the field of international human rights and international criminal law, Margaret is currently a Ph.D. student at The Queen’s University Belfast, School of Law researching the application of a jus post bellum framework to the peacekeeping, peacebuilding and ownership phases of the post-armed conflict environment. Having both the benefit of human rights advocate and academic experience, Margaret spends much of her time bridging interdisciplinary gaps within the substantive fields of international relations, law and politics as well as between practitioners and academics in those fields.
In her guest post below, she introduces the Winter Issue of Accountability, the newsletter of the Interest Group of the American Society of International Law. Her post provides a roadmap for the issue’s look at judicial and legislative commentaries as well as updates from the ICC. Margaret is the Newsletter Editor of the International Criminal Law Interest Group for the American Society of International Law.
Previously, Margaret was an International Fellow at the Istituto Superiore Internazionale de Scienze Criminali, in Siracusa, Italy. Following the fellowship, she continued as a Program Officer working with Professor M. Cherif Bassiouni as the coordinator for the Fighting Impunity and Promoting International Justice Project. She was also a Guest Researcher with the Max Planck Institute for Foreign and International Criminal Law in Freiburg i. Br., Germany. Margaret received her J.D. and a Certificate in International and Comparative Law from DePaul University in Chicago, Illinois, where she is a licensed attorney. She also holds a M.st. in International Human Rights Law from Oxford University. Margaret has also studied in Costa Rica focusing on human rights law and the Inter-American Court of Human Rights. Previously, she has been a Sullivan Fellow with the International Human Rights Law Institute where she received funding through the Vincentian Endowment Fund to perform research and coordinate a symposium entitled Darfur: Facing Genocide in Africa. She has lectured on topics of transitional justice, responsibilities of non-state actors, humanitarian law and human rights law. Margaret has also published contributions and reports for The Pursuit of International Criminal Justice Set: A World Study on Conflicts, Victimization, and Post-Conflict Justice, a 2-volume set published in 2010. 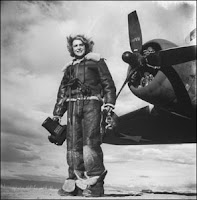 Margaret dedicates her work on the blog to Margaret Bourke-White (1904-1971) (prior IntLawGrrls post), who was the first female war correspondent, the first woman to work in a combat zone, and the first Western photographer allowed entry into the Soviet Union in 1930. Of Bourke-White (right), Margaret writes:

Margaret Bourke-White pioneered the field of photojournalism. One need only look at the photos from Vietnam, Abu Ghraib and the recent Arab World to see how media alters social change. She valiantly paved the way for women to play a role in documenting armed conflicts and changing the way that the public views the effects of war. Bourke-White documented life in Communist Russia and Nazi Germany where, travelling with General Patton’s troops, she crossed the border into Germany and in 1945 became the first individual to document concentration camps. Her photographs taken at Buchenwald (left) compelled Life magazine, for the first time, to openly publish the visual horrors of war. Bourke-White would then travel east chronicling the racial tensions and partitioning of India and Pakistan, immortalized by Candace Bergen’s portrayal of her in the 1982 Academy Award Best Picture, Gandhi. Bourke-White went on to photograph moments of apartheid in South Africa and the Korean War. Photojournalists remain

key actors in shaping public and state opinions regarding atrocities and modern conflicts. Working in the predominantly male field of photojournalism within a masculine arena of war, Margaret Bourke-White set the stage for women to bring images of humanitarian tragedies to the populous spreading the unseen consequences of armed conflicts and injustices.

Bourke-White joins IntLawGrrls' other foremothers in the list just below our "visiting from..." map at right.
Heartfelt welcome!