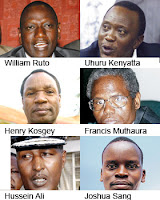 Earlier this month, the so-called "Ocampo Six" (at left, photo credit, and depicted on their own facebook page) made their initial appearances before the International Criminal Court. See our prior coverage here and here about the opening by the ICC prosecutor of an investigation into the situation in post-election Kenya.

At this hearing (right, photo credit), Pre-Trial Chamber II set the date of the hearing on the confirmation of charges for September 1, 2011.
Kenya has challenged the admissibility of the cases in accordance with Article 19 of the ICC Statute. The Application on behalf of the Government of the Republic of Kenya pursuant to Article 19 of th 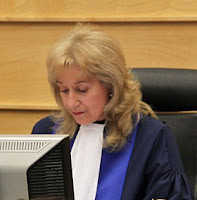 e ICC Statute is available here. The government argues that the August 2010 constitution envisions important judicial reforms (such as the appointment of a public prosecutor independent from the Attorney-General) that will be put in place in September 2011. These reforms, it is argued, will enable Kenyan national courts to prosecute post-election violence cases, including those now pending before the ICC. The government makes an impassioned plea to respect the principle of complementarity and give the country time to "get its house in order." Written observations on the petition by the prosecutor, defense, and Office of Public Council are due this week (on April 28, 2011). Kenya has also requested the assistance of the Court pursuant to Article 93(10) of the ICC Statute in its internal investigations into post-election violence.

At the close of the initial appearance hearing, the presiding judge, Ekaterina Trendafilova (Bulgaria, above right), made the suggestions that counsel not wear wigs in the courtroom. (credit for photo at left of Australian barrister Margaret Battye) Trendafilova apparently said:

This is not the dress code of this institution ... In this quite warm weather maybe it will be more convenient to be without wigs.