How to begin paying my respects to Keith Aoki?
Keith (right) worked across the hall from me these past 4 years. He'd joined us as a Professor of Law at the University of California-Davis in 2007, having been the Philip H. Knight Professor of Law at the University of Oregon.
It was always a delight to visit with Keith, to share in his ever-present cheerfulness as we mulled questions of law, politics, and myriad other areas.
Emphasis on "myriad."
Keith's expertise won renown in many fields:
► Law and social science.
Local government, intellectual property, Asian American studies, cultural geography, agriculture, critical theory, to name a few. This sampling of publications illustrates his breadth of intellectual endeavor: Seed Wars, Cases and Materials on Intellectual Property and Plant Genetic Resources (2008); "(In)visible Cities: Three Local Government Models and Immigration Regulation" (co-authored, 2008); and "Is Chan Still Missing? An Essay About the Film Snow Falling on Cedars and Representations of Asian Americans in U.S. Films" (2001).
► Art, too.
As explained at page 73 here: "In the mid-1980s" Keith, holder of bachelor's and master's degrees in fine arts, "decided to leave the bohemian art demimonde to go to Harvard Law School." Keith drew wonderful cartoons. Some made their way into graphic accounts of law, such as Bound by Law? Tales from the Public Domain (2006). Bound is available free online via a Creative Commons license -- a fact that hints at Keith's generosity, to colleagues, students, everyone. A couple years ago Keith gave a hard copy to my then-preteen son, who absorbed it avidly and is now wont to cite chapter and verse of copyright law. (Keith co-authored Bound with James Boyle and Jennifer Jenkins, the latter of whom remembers him here. IntLawGrrl Hari Osofsky remembers him here. Other remembrances are here, here, here, and here.)
Keith's creative expression included playing bass in a band, the Garden Weasels, and that avocation contributed to the forthcoming graphic book by him and his co-authors, Theft! A History of Music.
In addition to valuing his friendship, I've been particularly grateful for Keith's unflagging support for the California International Law Center at 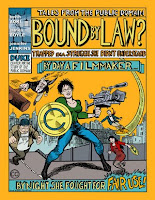 King Hall, the law school initiative founded 2 years ago. He was a member of our CILC Faculty Council, served on CILC committees, and helped immensely with program suggestions and speaker invitations.
Keith passed away yesterday morning, at age 55. He is survived by his wife Mona, their 9-year-old twin daughters, and a world of friends. We will miss him beyond words.

A great loss, but he leaves a tremendous legacy among his family, friends, and colleagues...Thanks for posting this, DMA.