'Why not invite those nations with a jurisdictional claim against Mr. Mohammed – those which lost citizens on 9/11 – to send cleared and qualified senior military lawyers to serve in the court at Guantanamo?'

So asked William Shawcross recently in The New York Times.
Shawcross' op-ed, “Lessons from Nuremberg,” advocated “internationalization” of military commissions destined to try alleged 9/11 conspirator Khalid Sheikh Mohammed and 4 others in the GTMO courtroom (bottom right) that the Bush Administration built just for the purpose – the same courtroom in which I observed a mess of a KSM hearing back in December 2008. 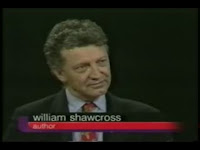 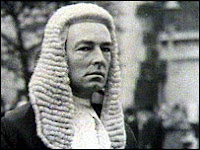 Turns out that the author (far left) of this Times op-ed – and a related upcoming book – is the son of the Chief British Prosecutor in the Trial of the Major War Criminals at Nuremberg, Hartley Shawcross (near left). (News to this ’Grrl, who admired the son’s Cambodia book, Sideshow (1979). Seems the son's done a biography of the British queen's mother in between.)
Application of what international lawyers know as the passive personality link would allow many affected countries to participate, Shawcross argues. He names 3 – Britain, Japan, and Ghana – thus omitting many others despite his earlier observation that most of the victims of Al Qaeda violence have lived in places like Iraq, Pakistan, Afghanistan, and Somalia.
Would he advocate adding judges from those countries to his new court?
Hard to imagine the United States giving needed security clearance even to all nominees from the 1st trio of countries.
And what end would such a “hybrid” trial serve?
Among Shawcross’ answers:

'Such internationalization of the court in Guantánamo would call the bluff of those American allies who benefit from American protection but cannot resist criticizing its processes.'

Seems a bitter vial to add to an already toxic brew. (In arguing that “every year military courts dispense justice to thousands of Americans,” Shawcross' op-ed stunningly elided the critical differences between ordinary courts-martial and even the latest version of special, post-9/11 military commissions. These differences surface throughout IntLawGrrls' Guantánamo series.)
Isn’t it bad enough that new contemplation of trial at the U.S. military base at Guantánamo Bay, Cuba, comes only as a result of the Obama Administration’s latest reversal of policy? How long would it take to promulgate yet another set of newfangled regulations? Better to look forward to new and fair criminal justice collaborations than to lard GTMO trials with yet another untested mission.
And as for the GTMO trial itself?
Best way to serve Shawcross' laudable goal of aiding collective understanding of the terrorist attacks of September 11, 2001, is to conduct the trial in as open a proceeding as possible.
Accept that federal court in Manhattan is out of the question. Even so, an option other than Shawcross’ odd and elaborate homage to Nuremberg presents itself: 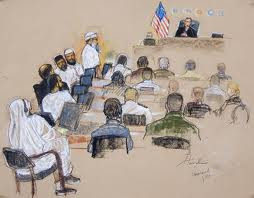 Via the same seconds-delayed video piped into GTMO’s small courtroom gallery, let’s have every minute of trial broadcast and webcast.
Live.
Warts and all.
On C-SPAN. Canal+. Al Jazeera. Everywhere.
Now that would jog the world’s memory.