(Delighted to welcome back alumna Mary Ellen O'Connell, who contributes this guest post) 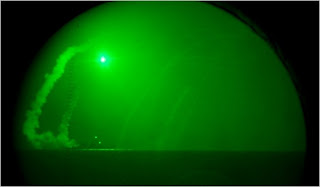 The coalition military action in Libya began March 19, 2011. This may sound like a very brief time considering that the United States is heading into its eleventh year of war in Afghanistan and ninth in Iraq. But it is ten times longer than President Barack Obama’s prediction: Remember, he was contemplating days, not weeks. (photo credit)
More worrying is his new reason for being in Libya. The President told the nation that military action was absolutely necessary to protect civilians. Now Obama, British Prime Minister Cameron and French President Nicolas Sarkozy say military action will continue until Libyan leader Moammar Gadhafi is gone.
The dramatic change should surprise no one. Protecting civilians with major military force in Libya was always an unlikely prospect: “humanitarian” is not a military objective. Removing a national leader and defeating an army, however, are.
And as soon as Ghadafi is gone, President Obama can declare victory and move on, which plays well in the sound-bite world of politics.
What does not play well is patient, careful, costly support of national transformation. Action truly designed to protect civilians, and, more importantly, to lead to a healthy, well-governed Libya, does not play well– it is anything but a sound bite. As I wrote in the days before the military intervention in “How to Save a Revolution”, the Libyan rebels made the error of taking up arms in a war they could not win– perhaps they were emboldened by the loose talk of a military intervention in Egypt? By the time they made their fateful decision, the only way to minimize death and destruction in Libya and to support democracy was to get the rebels out of Libya, to a safe place where they could build a peaceful movement.
The departure of the armed resistance would have left Ghadafi no reason to continue fighting in Benghazi. He might have been able to persuade his forces to continue attacking for the sake of revenge, but it is hard to say that more people would have died or been displaced in that scenario than has occurred in this month of heavy bombing by two sides.
Once the rebels were in safety, they could have selected leaders and built a movement. With that movement in place, its leaders would have been in a position to negotiate a peaceful transition with Ghadafi.
One of the great differences between Libya, Egypt, and Tunisia is that Egypt and Tunisia had a human rights movement in place. Well-trained lawyers, with connections to counter-numbers in Europe and North America, were in a position to work peacefully for change. Their struggle is far from over, but they have the

building blocks that just do not exist in Libya.
This sort of longer term, deep thinking about how to assist in Libya apparently did not appeal to President Obama’s advisers, who have been committed to military action for human rights since the failed interventions in Rwanda and Bosnia.
I say failed interventions because that is what they were. There has been an insistence on misreading the facts of Rwanda and Bosnia, saying they were failures to intervene, rather than what they were: failed interventions. (See this video clip of my exchange with State Department Legal Adviser Harold Koh on international law and intervention at last month's ASIL Annual Meeting.)
Libya was turning into another failed intervention until Obama, Sarkozy, and Cameron announced the new goal: removing Ghadafi.
Once Ghadafi is gone, I predict victory will be declared, and once again the wrong lessons will be learned from the use of military force.

If another month goes by, however, and the fighting continues, I urge President Obama to change directions again. Ask the African Union to renew the peace effort that Secretary of State Hillary Clinton dismissed because it involved negotiating with Ghadafi. Put peace, reconciliation, protection of civilians, and the building of a new Libya ahead of sound-bite politics.