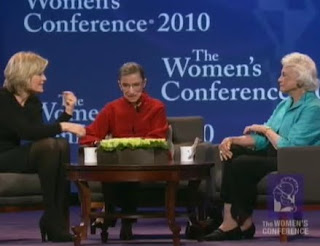 'How many women would be enough?' Sawyer asked.
'Nine,' Ginsburg replied with a smile. 'There've been nine men there for a long time, right? So why not nine women?'

-- U.S. Supreme Court Justice Ruth Bader Ginsburg (center) (prior IntLawGrrls posts), in conversation with ABC TV News' Diane Sawyer (left). (Hat tip to Professor Sally Kenney, Executive Director, Newcomb College Institute and Newcomb College Endowed Chair, Tulane University, via IntLawGrrls guest/alumna Fionnuala Ní Aoláin) The conversation, video of which is available here, took place last October during a California conference on women. Also on the dais was the Honorable Sandra Day O'Connor (above, right), who retired in 2006 from her post as the 1st woman Justice. Today, of course, there are 3 -- in addition to Ginsburg, newcomer Justices Sonia Sotomayor (prior posts) and Elena Kagan (prior posts). Of this development, O'Connor said:

'I've got to tell you, I went to the Supreme Court recently... I sat in on an argument, and I looked up at the bench on which I sat for 25 years, and what did I see? I saw on the far right, a woman. On the far left side, a woman. And here in the middle, a woman. And it was dazzling.'