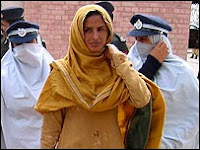 The victim, Mukhataran Mai, hit world headlines after speaking out about her ordeal in 2002. She has since become an icon for women's rights in Pakistan.
She said she now feared for her life.

--The BBC, in an article reporting on a decision yesterday in which Pakistan's Supreme Court acquitted all but one of "six men charged over a village council-sanctioned gang rape" committed against Mai (center), about whom IntLawGrrl Karen E. Bravo has posted. (2005 photo credit; thanks to California-Davis law student Baber Khan for notice of this judgment)