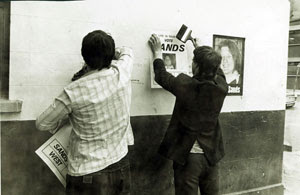 On this day in ...
... 1981 (30 years ago today), an inmate on hunger strike in a Belfast prison was elected to the British Parliament. Fifty-two percent of the electorate in the region of Fermanagh and South Tyrone, Northern Ireland, voted for Bobby Sands, who ran as a candidate of the "Anti-H Block" campaign, a term that referred to the section of the Maze prison in "reserved for republicans and loyalists convicted of terrorist offences." (credit for photo of campaigners putting up pro-Sands poster) As stated by the BBC:

In spite of attempts by the European Commission on Human Rights to mediate, Bobby Sands died on 5 May 1981.
He was the first of 10 republican prisoners to die after hunger strikes.
They attracted international media attention and sympathy for the republicans.
The hunger strikes came to an end in October 1981.
However, the Conservative Government of Margaret Thatcher granted the republicans only a few minor concessions.