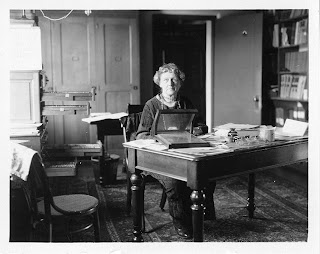 On this day in ...
... 1941 (70 years ago today), Annie Jump Cannon died, 77 years after she'd been born in Delaware. Her father was a shipbuilder and legislator; her mother who loved to look at the stars and taught her daughter to do the same. Following graduation from Wellesley College, Cannon devoted herself to travel photography, but then began studying astronomy. In 1896 the Harvard College Observatory hired her and other women to catalogue stars; she "became one of the foremost American astronomers" and a co-developer of the Harvard Classification Scheme, which was the first serious attempt to organize and classify stars based on their temperatures. She received a permanent appointment at the Harvard Observatory a few years before her death. (credit for photo of Cannon at her Observatory office)