On this day in ...
...1931 (70 years ago today), Alfonso XIII, who entered the world 6 months after the death of his royal father and thus was born the King of Spain, went into exile with these words: 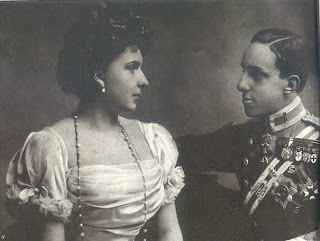 Sunday's elections have shown me that I no longer enjoy the love of my people. I could very easily find means to support my royal powers against all comers, but I am determined to have nothing to do with setting one of my countrymen against another in a fratricidal civil war. Thus, until the nation speaks, I shall deliberately suspend the use of my royal prerogative.

The American writer Dorothy Parker once called Alfonso "the Royal romp" on account of his playboy lifestyle. Marring his long reign were defeat in the Spanish-American War, a wedding-day assassination attempt (credit for photo of the king and his bride, Princess Victoria Eugenia of Battenberg), authoritarianism, and, eventually, dictatorship. His exile would begin a Second Spanish Republic -- short-lived, as the Spanish Civil War came quickly.