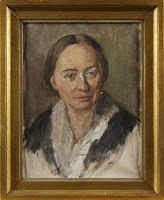 On this day in ...
... 1926 (85 years ago today), Ellen Key (left) died in Strand, Sweden, 76 years after she'd been born into a politician's family in Sundholm in the same country. A teacher, lecturer, and suffragist, she was also a "feminist and writer whose advanced ideas on sex, love and marriage, and moral conduct had wide influence; she was called the 'Pallas of Sweden.'" (credit for portrait of Key by Hanna Pauli) Key's milestone work was Barnets århundrade (1900); among the many languages in which it was republished was English, as The Century of the Child (1909). She advocated state support for maternity on account of the importance of child-rearing -- a view that won currency in Sweden and elsewhere.