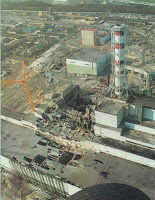 ... 1986 (25 years ago today), an explosion and fire at a power plant in Ukraine, then part of the Soviet Union, touched off the Chernobyl disaster. (photo credit) It would be 2 days before officials acknowledged the accident, a nd then only after Scandinavian countries detected "abnormally high radioactivity" in their atmosphere. "The battle to contain the contamination and avert a greater catastrophe ultimately involved over 500,000 workers and cost an estimated 18 billion rubles, crippling the Soviet economy." Nuclear crises in the wake of the earthquake in Japan last month -- a crisis provisionally raised to Level 7, the same as Chernobyl -- have prompted reexaminations of Chernobyl, previously described as "the world's worst nuclear accident."