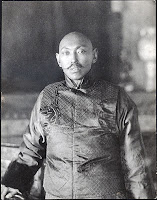 On this day in ...
... 1906 (105 years ago today), the Convention Between Great Britain and China Respecting Tibet was signed at the Chinese capital then known as Peking. It would be ratified in London on July 23 of the same year. By the treaty's terms Britain agreed "not to annex Tibetan territory or to interfere in the administration of Tibet"; meanwhile, China agreed "not to permit any other foreign State to interfere with the territory or internal administration of Tibet." Within years, occupation by Chinese troops would compel the flight to India of the 13th Dalai Lama, Ngawang Lobsang Thupten Gyatso (right). (photo credit)