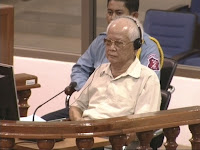 On this day in ...
... 1976 (35 years ago today), the man who'd been a "virtual prisoner" since the Khmer Rouge takeover the previous year, Prince Norodom Sihanouk, was forced to resign his position as Cambodia's head of state. Within days Khmer Rouge leader Khieu Samphan (right) would be named "Chairman of the State Presidium," and his colleague, Pol Pot, Prime Minister. As IntLawGrrls have posted in our Khmer Rouge accountability series, Pol Pot is dead, but Khieu Samphan awaits trial before the Extraordinary Chambers in the Courts of Cambodia on charges of war crimes and crimes against humanity. (photo credit)