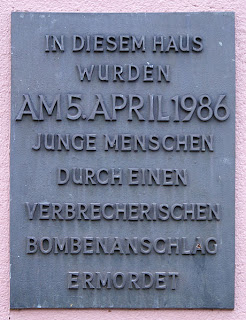 On this day in ...
... 1986 (25 years ago today), a bomb exploded in a Berlin discotheque popular with American servicemembers and filled at the time with nearly 500 women and men. Killed as a result of the bombing of the club called La Belle were 2 U.S. soldiers and a Turkish woman. More than 200 persons, among them many Americans, were injured. (credit for photo of plaque commemorating tragedy) The bombing touched off tit-for-tat retaliations: an April 1986 U.S. bombing in Libya that claimed the life of the daughter of Libya's leader, Moammar Gadhafi, followed by the 1988 explosion over Lockerbie, Scotland, of a jet carrying many U.S. and British passengers. The incidents have garnered new scrutiny recently on account of Security Council-authorized action against Libya.