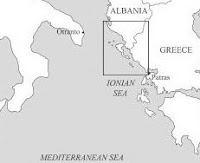 On this day in ...
... 1949, the International Court of Justice decided its 1st case. Its judgment on the merits in Corfu Channel (United Kingdom of Great Britain and Northern Ireland v. Albania) held by a vote of 11 to 5 that Albania was responsible for destruction and loss of life stemming from the 1946 incidents in which British destroyers hit mines while traveling in Albanian waters. (map credit) By a vote of 14 to 2, the ICJ further declared that Britain's entry had not violated Albanian sovereignty. The ICJ ruled unanimously that its finding of responsibility constituted satisfaction, and so declined to award damages.