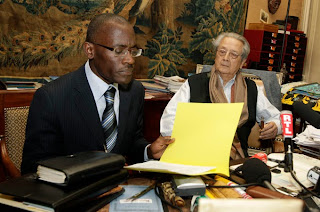 It's been a while since we've posted the test-your-international-knowledge quiz that we call puzzler. But a photograph now making the news cycles inspired us. Al Jazeera English offered this caption for the photo reprinted here, which accompanies a story about the U.N. team appointed to investigate allegations of atrocities in Côte d'Ivoire:

Alain Toussaint, left, a spokesman for Gbagbo, accused France of staging a 'coup' against his leader [Reuters]

So here's the puzzler:
What about this photograph signals that Laurent Gbagbo, the just-deposed Ivoirian President, is deeply worried about finding himself soon at The Hague, awaiting prosecution before the International Criminal Court?