(Delighted to welcome back alumna Felice Gaer, who contributes this Read On! guest post)

I’m writing to share the news with IntLawGrrls bloggers and readers that the Jacob Blaustein Institute for the Advancement of Human Rights (JBI), which I direct, has published a compendium of legal norms for genocide prevention, setting forth a set of risk factors for genocide and the normative basis in international law for those risk factors.
JBI’s Compilation of Risk Factors and Legal Norms for the Prevention of Genocide sets out the legal framework for and gives substance to the concept of “genocide prevention,” the cornerstone of the Special Adviser’s mandate and a core obligation of the 140 States that have ratified the UN Convention on the Prevention and Punishment of the Crime of Genocide. The Compilation was initiated at the request of the United Nations Secretary-General’s Special Adviser for the Prevention of Genocide, Dr. Francis M. Deng (below left). (photo credit)
As Dr. Deng stated in 2009, the JBI Compilation is designed to “encourage States to fulfill their genocide prevention obligations,” by encouraging them to take action to prevent the situations identified in the risk factors from spiraling into mass atrocities and 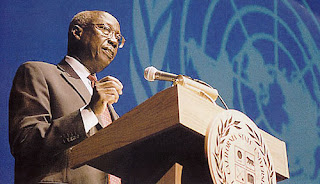 even genocide when they occur. The JBI Compilation reminds States that they have obligations to prevent genocide based on internationally accepted norms with which they are expected to comply. It also may provide a basis for the Special Adviser to intervene in situations which appear to be pre-genocidal.
To quote E. Robert Goodkind, Chair of JBI:

As we know from the history of the Holocaust, the Rwandan genocide, and other atrocities, genocide does not begin overnight, and is always preceded by identifiable warning signs. The JBI Compilation will provide UN officials like the Special Adviser on Genocide Prevention, States, and others with a basis for taking early action to fulfill the promise of ‘never again.’

The JBI Compilation identifies a number of “risk factors” – severe and systematic human rights abuses which have been committed in the lead-up to past genocides and atrocities, the presence of which should serve as an early warning to States to take remedial measures. The document also identifies a set of “special circumstances” that are not as closely linked to genocide as the risk factors, but which can still increase the possibility that genocide might occur. Among the risk factors cited in the text, here are three that address gender-related matters which IntLawGrrls readers may wish particularly to note:
► The systematic use of rape and sexual violence, including the incitement thereof, targeting members of a particular group.
► The systematic forced marriage of women, enforced sterilization, forced pregnancy, the prevention of births of children from a particular group, and other acts aimed at destroying a particular group in whole or in part, including although not limited to, bans on intermarriage or forced marriage to individuals from the state-privileged identity/ies.
► The systematic forcible transfer of children of a particular group from their families to individuals with a different identity for the purpose of changing their identity and assimilating them into another group.
These can then be invoked to strengthen the basis for states taking protective action. The term ‘particular group’ refers to those set forth in Article II of the Convention against Genocide – i.e., members of a national, ethnic, racial or religious group.
For these and each of the other risk factors cited, the 137-page Compilation presents existing legal norms, drawn from diverse instruments – national, regional and international – that are relevant to the prevention of genocide.
JBI developed the Compilation with input and guidance from a number of leading international human rights experts, including several current and former UN special rapporteurs, the UN Special Representative of the Secretary-General on the Prevention of Genocide and his staff, and scholars and advocates.
We were fortunate to release the Compilation at the United Nations at an event at UN headquarters in New York that featured a discussion on genocide prevention with expert panelists: moderator Goodkind; Dr. Deng; Dr. Edward Luck, the Special Adviser to the Secretary-General on the Responsibility to Protect; and yours truly. In addition to an engaged audience of NGOs and diplomats, we were joined by Roberta Cohen, formerly Senior Fellow at the Brookings Institution, who played a key advisory role on the project.
Principal researchers for the Compilation were Jo-Anne Prud’homme, formerly of JBI’s staff, and Naomi Kikoler, of the Global R2P Center. In addition, we were especially grateful to Christen Broecker, JBI’s new International Human Rights Officer, who brought the project to and through its final publication.
The Jacob Blaustein Institute for the Advancement of Human Rights, celebrating its 40th anniversary in 2011, has a long and dedicated history of supporting projects and initiatives related to genocide prevention, as well as longstanding commitment to strengthening human rights protections through international institutions and mechanisms.
Click here to download the Compilation; if you would like to receive a hard copy, please write to Jennifer at jbi@ajc.org.