(Thanks to IntLawGrrls for giving me the opportunity to contribute this guest post!)

The International Criminal Law Interest Group for the American Society of International Law, chaired by Beth Van Schaack and Linda Malone, and of which I am delighted to serve as Newsletter Editor, has released the Winter Issue of Accountability (previous posts regarding the group are here). This issue has grouped articles around themes outlining the forward thinking aspects of international criminal law. The issue is separated into three sections - Judicial Commentaries, Legislative Commentaries and a section focusing on the ICC. Each section provides new insights in different aspects of ICL yet the common theme throughout all the articles is found in the newsletter’s name – Accountability. 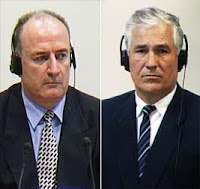 Our journey through relevant ICL Judicial Commentaries begins with two pieces by Gentian Zyberi and Alexis Demirdjian taking us through the recent decisions by the ICTY Appeals Chamber regarding the Haradinaj and Šljivančanin cases. Zyberi points out not only the substantive questions raised by the decision surrounding witness intimidation, but more importantly what he views as the dangerous precedent of ordering a retrial and failing to show deference to the Trial Court. Demirdjian’s piece also notes a proactive Appellate Court in Šljivančanin where the court determined the five year sentence handed down by the Trial Court was insufficient as related to the gravity of the crimes committed and increased the sentence to 17 years. Subsequently, the Appellate Court reviewed the testimony of an officer who informed the Court that Šljivančanin (left, on the right) had not been informed of key information that placed those to whom he owed a legal obligation in imminent danger and left him with a ten year sentence.
This section closes with a piece by Alexandra Meise Bay, who analyzes Case 001 – Duch - of the ECCC. In this piece, she lays out the arguments and judicial split, between international and na

tional judges, surrounding the extension of the statute of limitations to domestic crimes within the jurisdiction of the ECCC. In her discussion, she outlines the international and domestic standards applicable to the retroactive extension of a statute of limitations within the context of Cambodia. (Photo at left by A.K. Meise Bay depicts a member of the Cham Muslim minority watching Duch over a live feed of the reading of the verdict in Case 001 from the public viewing area of the ECCC. (July 26, 2010)).
As we move from the Judiciary to the Legislature we begin with Magne Frostad’s look into the regulation of the death penalty under modern international criminal law. In doing so, Frostad notes the changing attitudes towards the death penalty over the past sixty years and utilizes the European framework, and some international mechanisms, to explore available enforcement mechanisms. Specifically, he examines the ECHR, how relevant protocols affect state and non-state parties and what criteria judges appear to be using when analyzing cases involving the possibility of the death penalty.
Accountability then moves from the death penalty to mutual legal assistance as regards frozen Duvalier assets that were removed from Haiti. In this article, Konstantinos Magliveras looks specifically at Swiss legislation that should allow for the restitution of illegal acquired state assets, but given the length of time are now treated as legal for mutual assistance purposes. This piece is of particular timeliness, as in January 2011 Duvalier returned to Haiti and was immediately charged with corruption and crimes against humanity domestically. The affect these charges will have on the restitution of the Swiss assets will be of great interest in upcoming months.
The section on Legislative Commentaries closes with a move from Haiti back to Europe and Africa in the form of the EC and the Saharan Fisheries Partnership Agreement. J.J.P. Smith
evaluates changes to the agreement pertaining to EC interaction with Western Sahara and the over-fishing over her waters. Smith utilizes the crime of pillage, under various historical definitions, and international criminal liability theory to agree with recent EU Legal Service statements citing violations by the EC.
The largest section of Accountability looks to the future of the ICC as concerns US engagement, new preliminary examinations the Court has taken on as well as continued discussion

surrounding the crime of aggression. (Assembly of States Parties at right). Carl Christol opens the section with a general background piece to international criminal law and the history of the United States and the ICC through the Kampala Conference. The commentary provided by Rachel Gore furthers this discussion by noting what future interactions and implications are awaiting both the US and the ICC. Her piece recounts the ASIL Expert Forum that took place allowing experts (including IntLawGrrl Beth Van Schaack) to comment on the proceedings in Kampala and the way forward. A key issue in the way forward, and noted in Gore’s commentary, is the view on the crime of aggression both in terms of US foreign policy, the UN Security Council and the ICC. Stefan Kirchner continues the aggression story by looking at US opposition to the definition while being a non-state party that was very actively involved in Kampala. Noha Aboueldahab takes the Kampala discussion even further looking at the effects the definition of the crime of aggression will have on territorial sovereignty and the role of domestic inquiries in defining the crime. Moreover, Aboueldahab responds to the point-counter-point discussion begun in the last issue of Accountability by Dov Jacobs and Keith Petty. This section of the issue closes with a look towards the ICC’s future with Nick Allen’s piece on the recent preliminary examination into North Korean war crimes. Allen discusses which particular incidents would fall under the subject matter jurisdiction of the ICC, issues of admissibility and the possibility of escalation given the gravity of nuclear weapons. This exploration into jurisdiction and enforceability as regards North Korea is new territory for the ICC.
This issue provides a unique look at the progression of international criminal law from a judicial and legislative perspective. Moreover, the pieces that further the crime of aggression discussion begun in the last issue and the way forward for the ICC continue themes between issues raising the level of scholarship in Accountability. Check out the full issue here!!

by Margaret Zimmerman at 6:00 AM