Responsibility to protect, Libya to Japan

'Each individual State has the responsibility to protect its populations from genocide, war crimes, ethnic cleansing and crimes against humanity. This responsibility entails the prevention of such crimes, including their incitement, through appropriate and necessary means. We accept that responsibility and will act in accordance with it.'

The original, and broader, formulation of the responsibility to protect was included in the December 2001 report, The Responsibility to Protect, from the International Commission on Intervention and State Sovereignty (ICISS). As a basic principle, this report concludes that

'where a population is suffering serious harm, as a result of internal war, insurgency, repression or state failure, and the state in question is unwilling or unable to halt or avert it, the principle of non-intervention yields to the international responsibility to protect.'

For military intervention to be justified for human protection purposes, there must be:

'serious and irreparable harm occurring to human beings, or imminently likely to occur, of the following kind:
'A. Large scale loss of life, actual or apprehended, with genocidal intent or not, which is the product either of deliberate state action, or state neglect or inability to act, or a failed state situation; or
'B. Large scale ‘ethnic cleansing’, actual or apprehended, whether carried out by killing, forced expulsion, acts of terror or rape.'

In dealing with what should occur if the Security Council fails to fulfill its responsibility or to do so “in a reasonable time,” “alternative options” are:
► Consideration of the matter by the General Assembly in Emergency Special Session under the “Uniting for Peace” procedure; and
► Action within area of jurisdiction by regional or sub-regional organizations under Chapter VIII of the Charter, subject to their seeking subsequent authorization from the Security Council.
The ICISS report cautions:

'The Security Council should take into account in all its deliberations that, if it fails to discharge its responsibility to protect in conscience-shocking situations crying out for action, concerned states may not rule out other means to meet the gravity and urgency of that situation –and that the stature and credibility of the United Nations may suffer thereby.'

Speaking from the perspective of September, 2001, the Commission concludes that it is impossible to find a legal consensus regarding humanitarian intervention without UN authorization but does not rule out the possibility of such intervention. It is for this reason that the Commission remarks that when a state or states intervene because the UN has failed to do so, and the states or state do so successfully, there may be “enduringly serious consequences for the stature and credibility of the UN itself.”
This R2P framework illuminates current events in Libya and Japan. 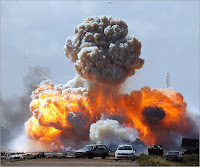 There are four basic sanctions against Libya in Security Council Resolution 1973 (prior IntLawGrrls post); specifically, the:
► Assets freeze;
► No-fly zone;
► Arms embargo; and
► Protection of civilians.
The assets freeze is left to individual states and does not involve force, so can be set aside for purposes of this discussion. (credit for March 2011 Goran Tomasevic/Reuters photo of airstrike in Libya)
The resolution authorizes states to “take all necessary means” to protect civilians. On March 24, 2011, NATO announced that it would be assuming responsibility for the arms embargo and the no-fly zone, and a few days later for protection of civilians as well.
Resort to the responsibility to protect, although cited by some commentators in reference to the resolution, is unnecessary to the legal authority of the resolution. The three-prong authorization of force falls easily within prior precedents predicated on a finding of a threat to peace or breach of peace under Chapter VII and authorization of collectively authorized humanitarian intervention within the term threat to peace.
Indeed, the crimes precedent to triggering the responsibility to protect may or may not have been sufficiently established to give rise to the responsibility. This responsibility is triggered only when a state has “manifestly” failed to protect its population from acts constituting genocide, war crimes, ethnic cleansing, or crimes against humanity.
The resolution refers to Libya’s responsibility to protect the Libyan population, the “widespread and systematic attacks in the Libyan Arab Jamahariya” which “may amount to crimes against humanity,” and the referral to the International Criminal Court of these possible crimes. It does not declare that Libya has committed any of these crimes. More importantly, a state’s failure to protect its own population from these crimes triggers a collective responsibility to protect using peaceful measures. With respect to force, the formulation says only that the international community is “prepared” to use force in such circumstances, not that it has an affirmative responsibility to do so. In short, resort to force remains as discretionary in terms of Security Council authorization as it was when predicated on a threat to peace.

Japan
Earthquakes, tsunamis, and climate disruption have focused international attention on environmental disasters, natural and anthropocentric, and the ability of the global community to respond adequately and immediately. Whatever the magnitude of the humanitarian violations in Libya, they are eclipsed by the sheer magnitude of the earthquake, tsunami, and nuclear disaster in Japan. (credit for NOAA animated model)

UN officials, including Secretary-General Ban Ki-moon, have been quick to deny that the responsibility to protect applies to environmental crises, including specifically climate change and its consequences. Nevertheless, the four specified crimes can encompass situations of abusive governments or non-state actors inflicting environmental damage.
In Iraq, for example, Saddam Hussein's destruction of the natural resources essential to living conditions of the Marsh Arabs could have been considered “deliberately inflicting conditions of life calculated” to bring about the physical destruction of the group in whole or in part.
The ICISS formulation calls for intervention even by force whenever there is large-scale loss of life, coupled with a state’s unwillingness or inability to act.
The reality of a deteriorating planet and multiple environmental disasters, which even the most well-prepared and well-intentioned state may find itself unable to address, highlights the shortsightedness in the UN position that the responsibility to protect should not be formulated to address environmental disasters.
Is there a humanitarian disaster which calls for global responsibility to respond and protect, with or without a state’s consent, more than a convergence of environmental disasters?
There is a pressing need for reconsideration of the responsibility in an environmental context, before the next disaster occurs in a state that is unable, and unwilling, to act.