(Thanks very much to IntLawGrrls for allowing me this guest post!)

When the U.S. joined the United Nations Human Rights Council in May 2009, the U.N. High Commissioner for Human Rights, Navi Pillay (left), stressed the benefits of U.S. engagement with the U.N. for the

cause of human rights and to the standing of the U.S. in the international community.

Given that the Bush administration had sharply criticized the human rights body and refused to participate during its tenure, conventional wisdom is that the Obama administration’s decision to join the Council gave the institution important political support and a chance for the U.S. to reclaim its role as a global human rights leader and champion.
But signing on as a card-carrying member of the Council is really just the beginning if the U.S. seeks to bolster the Council’s credibility and its own human rights image. The real test, as Pillay cautioned, is the degree to which the government embraces the entire international human rights agenda -- whether we criticize our friends as well as our enemies; and commit to accountability on our own record on the full spectrum of human rights rather than just resting on the progress we’ve already made. As it stands, the U.S. has a history of failing to embrace economic and social rights, such as access to healthcare, education, and housing, as well as civil and political rights.
Historically, economic and social rights have been the stepchild of the human rights movement. So Pillay’s emphasis on economic and social rights serves as a wake-up call for the U.S. and a welcome development in the international community. Despite being included in the Universal Declaration of Human Rights of 1948—the foundational international human rights document—these rights quickly became known as “second generation” rights with the assumption that they came later, both in time and priority. As the international human rights architecture and agenda emerged post-World War II, this second-class status was reflected in, and reinforced by, the human rights mechanisms that were created and the amount of time the international community spent on economic and social rights.
For instance, although separate international treaties on civil and political rights (the International Covenant on Civil and Politic Rights or ICCPR) and economic and social rights (the International Covenant on Economic, Social and Cultural Rights or ICESCR) were simultaneously drafted, when the treaties entered into force in 1976 individual complaints could only be made concerning violations of the ICCPR. This division was also reflected in countries’ constitutions written after World War II, where socio-economic rights provisions were often drafted as principles that policies should be based upon rather than rights that must be enforced. Prior to the late 1990s, U.N. special procedures (U.N. experts and working groups tasked to monitor and report on important human right issues) focused exclusively on issues like torture, summary execution, and freedom of religion.
But, internationally, times have started to change. High courts around the world, in South Africa, India, and Colombia, have issued significant rulings enforcing economic and social rights, including the right to access to adequate housing and healthcare. One hundred and sixty nations are parties to the International Covenant on Economic Social and Cultural Rights (the U.S. is not among them), only five less than the International Covenant on Civil and Political Rights. According to a spokesperson for Pillay’s office, today more than half of the U.N.’s human rights procedures and programs (events, workshops, seminars, publications and missions in the field) focus on economic and social rights. And in 2008, the U.N. took steps to address the imbalance between the attention paid to economic and social rights verses civil and political rights by creating an individual complaint system for the ICESCR.
Over the last few months, the U.S. had an opportunity to show its commitment to economic and social rights as it went through its first Universal Periodic Review. The UPR, as it is often called, was recently created by the Human Rights Council (which is made up of representatives from forty-seven countries) and periodically evaluates the human rights records of all 192 member states. The U.S. review process included both a take home self-evaluation, in the form of a written report on its human rights record submitted to the U.N. Human Rights Council, and an oral quiz.
Last November, thirty-three high ranking officials from ten U.S. federal agencies and departments traveled to Geneva, Switzerland, to field questions from Council members and other U.N. member nations. During the review, it was clear that economic and social rights were as much a part of the conversation as the closing of Guantanamo Bay or the death penalty. Several countries raised questions about reducing poverty and eliminating disparities in access to housing, education, employment and healthcare. Other countries praised the U.S. for the passing of healthcare reform. Countries also repeatedly asked about the U.S. failure to ratify the International Covenant on Economic, Social and Cultural Rights.
Initially, the Obama administration’s position on economic and social rights sounded pretty good. The Obama administration expressed support for recommendations that it improve access to education, decent work and housing and to progressively realize the right to health. But two aspects of its position were troubling.
► First, the administration failed to commit to any concrete goals or policies to realize these rights.
► Second, it specifically rejected recommendations that it ratify the ICESCR even though it supported the ratification of several other human rights treaties.
In essence, the Obama administration agreed that it should be doing more to promote social and economic rights, but it refused to recognize that it has a human rights obligation to do so. This position was echoed by Assistant Secretary of State Michael Posner in a recent speech at the American Society of International Law. Although Posner championed the concept of economic and social rights, he disavowed recognizing them in a manner that would

create new domestic legal obligations . . . enforceable in courts [or] tie the hands of Congress and the states.

Now that the Universal Periodic Review is over, what is the hope for encouraging U.S. policies that show a greater respect for economic and social rights? The fact is we don’t need ratification of the ICESCR or a constitutional amendment to adopt policies to ensure that all Americans have access to education, housing and health care. It’s clear that the majority of Americans believe that the government has an obligation to protect, respect and even ensure economic and social rights. According to a 2008 Opportunity Agenda poll, a large majority of Americans think that education is a human right and almost three-quarters (72%) think health care should be a human right. 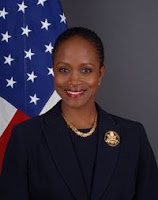 U.S. commitment to economic and social rights is not new. Franklin Roosevelt articulated his vision of human rights in his famous Four Freedoms speech and his 1944 State of the Union address helped inspire the Universal Declaration on Human Rights and ensured that economic and social rights were given equal status with civil and political rights. Post-World War II, our national commitment to ensuring “freedom from want” was embodied by social welfare legislation that has become a bedrock of American life – Social Security, Medicaid and Medicare – and continues today in legislation like healthcare reform. What made those reforms possible was President Roosevelt’s leadership and the political support to make his vision a reality.
Last November, Esther Brimmer (right), the U.S. Assistant Secretary of State for International Organizations Affairs, began the U.S. UPR review by stating,

For the United States, the UPR is a conversation in Geneva, but also one at home with our own people, to whom we are ultimately accountable.

While it is appropriate that the U.S. engages in a dialogue with other countries about its human rights record, in the end it is the American people who must demand that our policies respect, protect and ensure economic and social rights and hold our leaders to account if they fail. It’s certainly laudable for the U.S. to participate in the Human Rights Council and therefore, lend credibility to international human rights institutions, but it can only be a true human rights leader if it embraces the full human rights agenda at home. The Obama administration is starting to talk the talk, let’s make them walk the walk.