What Role for the African Human Rights System in the Current Transformation of North Africa? 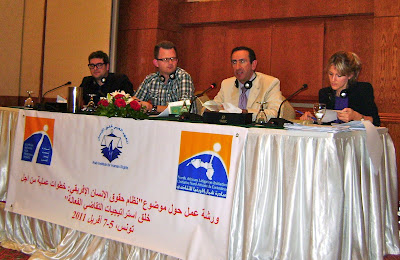 TUNIS - In Tunis last week, human rights defenders from across North Africa gathered to discuss the role that the regional African human rights system can play in the current transformation of North Africa. They were attending a workshop organized by the North African Litigation Initiative, a programme established by the Cairo-based Egyptian Initiative for Personal Rights.
Pictured above at far right, I work as the Legal Advisor for NALI, and it was our pleasure to host participants from Mauritania, Algeria, Tunisia, Libya, Egypt and Sudan. 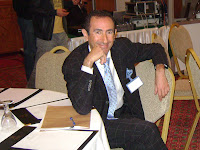 We were also honored to have Justice Fatsah Ouguergouz (left), the Algerian Justice from the African Court on Human and Peoples’ Rights, join us for the three-day proceedings.
It was particularly exciting to hear from Justice Ouguergouz given the pioneering ruling issued by the African Court on March 25. In issuing this Order for provisional measures against Libya, the Court instructed Libya to

'immediately refrain from any action that would result in loss of life or violation of physical integrity of persons.'

The Court’s judgment is its first binding ruling issued against a State. It is an important intervention by the African human rights system in recent North African events.
Overall, however, the view of the workshop participants is that the response of the African system to developments in North Africa has, to date, been slow and lacking in conviction.
Indeed, the fact that African institutions mandated with protecting and promoting human rights have, on the whole, reacted in a limited manner to events in North Africa led a couple of human rights workers to criticize our decision to hold the Tunis workshop. One human rights lawyer from the United Kingdom wrote to me a couple of weeks ago and said that he felt that the workshop was “mistimed.” The African human rights bodies, he said, could only offer recourses that are “time consuming and typically remote from real effects in actual situations.” At this point, he said, it was necessary both in Tunisia and across North Africa to deal with immediate human rights abuses and the rebuilding of domestic institutions. “So why,” he asked, “was this topic chosen at this time and place?” 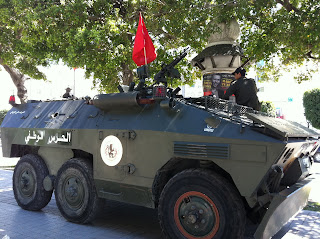 This question played through my mind on the first day when I arrived in Tunis and went downtown to have tea with a Tunisian activist. Tanks and barbed wire lined the streets (left and below). But the atmosphere was initially peaceful: a couple of women were even taking photographs of each other with the soldiers and tanks.
Suddenly, however, the mood changed. Police with batons and riot shields began chasing a group of young men and all of us sitting at the street-tables ran inside for cover. My Tunisian friend explained:

'The tensions are rising. There is frustration that reform is not occurring quickly enough. We have so much work to do and so many human rights abuses that must be remedied.'

This experience in downtown Tunis emphasized the continuing volatility in Tunisia – a volatility also evident in Egypt, where I live and work. It highlighted the fact that many immediate, domestic steps must be undertaken to ensure the creation of democratic societies fully removed from the past oppressive regimes. 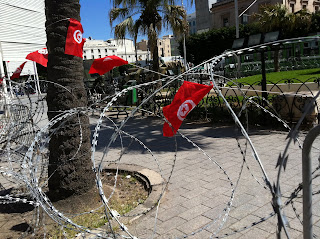 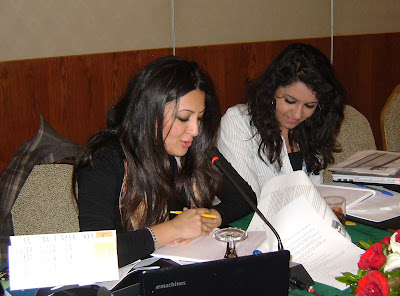 'The African Court cannot act, but can only react. Civil society therefore has a crucial role to play in creating an environment where it is possible for both the African Court and Commission to take steps to protect human rights.'

Following these remarks by Justice Ouguergouz, one Tunisian lawyer took me aside and showed me some of the scars that riddle his body following 8 years of imprisonment under the Ben Ali regime. The lawyer told me:

'I will fight for justice for these scars, and for the scars of thousands of other Tunisians. After this workshop I know that I needn’t stop at the domestic level. I will continue the fight for justice within the African system so my country can become a place of tolerance and dignity.'

It remains to be seen how exactly the African human rights system can play a role in the incredible societal transformations occurring across North Africa. One thing, however, is clear: North African human rights defenders are determined to seize this historical moment to ensure that human rights principles are respected. It is NALI’s mission to ensure they are given assistance to utilize every means available to achieve this goal, including recourse to the African regional system.