(Many thanks to IntLawGrrls for the opportunity to contribute this guest post)
U.S. proceedings seeking the deportation of Carlos Eugenio Vides-Casanova are set to resume in another week.
As IntLawGrrls guest/alumna Pamela Merchant has posted, the Department of Homeland Security has sought to deport Vides on charges of assisting or otherwise participating in torture. (See Immigration and Nationality Act § 237(a)(4)(D), 8 U.S.C. § 1227(a)(4)(D) (2006), referring to INA § 212(a)(3)(E)(iii)(I), 8 U.S.C. § 1182(a)(3)(E)(iii)(I).) This trial marks the first time that DHS has used the Immigration and Nationality Act removal provisions respecting torture against a senior level commander.
The removal hearing began on April 18 in Orlando, Florida. 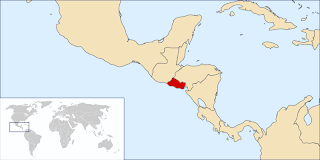 Government's case
► DHS called as its first witness Robert White, who had served as U.S. Ambassador to El Salvador (in red at left) from March 1980 to early 1981. (map credit)
Providing Immigration Judge James K. Grim a flavor of El Salvador at the time, White recalled that bodies were visible in the streets and that, in December 1980, he watched as the remains of the assassinated four U.S. churchwomen were being exhumed from a shallow grave. White said that he met numerous times with Vides, then Director of the National Guard, to discuss putting an end to human rights abuses.
Vides' lawyer, Diego Handel, attempted to develop a counternarrative through White’s cross-examination; specifically, that U.S. support gave the Salvadoran military an implicit "green light" to stop the Salvadoran opposition, by any means necessary. But White replied that in reality, U.S. policy was to the contrary:

'Had a political solution been pursued by El Salvador in 1980, as I and the U.S. Government recommended, ten years of conflict could have been avoided.'

► Next on the stand was Daniel Alvarado. Alvarado is a client of the Center for Justice & Accountability, the San Francisco-based nongovernmental organization for which I serve as Senior Advisor, in a civil case against former Salvadoran official Nicolas Carranza. While a student activist in August 1983, Alvarado testified, he was abducted by the Treasury Police. At that time, Carranza was Director of the Treasury Police, and Vides was Minister of Defense. Alvarado was tortured until he falsely confessed to the murder of a U.S. military advisor. But the U.S. Embassy doubted the veracity of Alvarado's confession. When the truth eventually emerged, the U.S. ambassador asked Vides to ensure Alvarado's safety; instead, Vides left him detained for over two more years.
On cross-examination, Vides' lawyer’s unsuccessfully tried to paint Alvarado and his political affiliations with the guerrilla brush.
► Also testifying was Dr. Juan Romagoza, CJA's lead plaintiff in Romagoza et. al. v. Garcia and Vides-Casanova, an Alien Tort Statute case against Vides. Romagoza provided medical care at community clinics in rural El Salvador. He testified that on December 12, 1980, as residents were lining up at a church for medical consultations, troops from the Army and National Guard, accompanied by men in plain clothes, arrived. The military opened fire, wounding Romagoza and others. Romagoza was captured and eventually transported to National Guard headquarters in San Salvador, where he was held for several weeks and tortured. At one point, Romagoza testified, Vides entered Romagoza’s cell during a torture session. And Vides was again present when Romagoza was released, emaciated and struggling to walk.
On cross-examination, Vides' lawyer, Handel, focused on minor discrepancies between Romagoza’s testimony in the prior Alien Tort Statute case and in the present removal case. But it did not appear that Handel scored any points with Grim, given that the judge stepped in personally to question Romagoza in order to obtain clarification of certain points. Handel also attempted to undermine Romagoza's identification of Vides in his cell. Romagoza had been chained to a cement floor, cleaned the day before for the visit of the "boss." According to him, his captors’ blows had loosened his blindfold and he was able to see Vides from the lower portion of his face on down. He also recognized Vides’ voice.

► DHS also called Dr. Terry Karl (right), the Gildred Professor of Latin American Studies and Professor of Political Science at Stanford University, as an expert witness. (photo credit) Karl described El Salvador’s long history of military control and the 1979 coup, which was intended to be a progressive turn but which ultimately ended with hard-line military officers, such as Vides, gaining power. Vides and other right-wing military officials ascribed to a theory of “total war,” Karl testified; they targeted teachers, doctors, members of opposition organizations, labor leaders, and the like for assassination and disappearance. According to Karl, U.S. officials, including General Wallace H. Nutting and Secretary of State George P. Shultz, were dispatched to El Salvador to meet with Vides to demand a stop to the repression and punishment for known

abusers. When Vides failed to respond, George H.W. Bush (left), then the U.S. Vice President, arrived in El Salvador with a list of suspects and a call to rein in the violence. (credit for 1981 photo)
For a time, the level of violence did decrease. Karl testified that this constituted evidence of Vides’ capacity to control the military and death squad killings. Nonetheless, the levels rose again through the 1980s. Impunity, said Karl, was a key factor in prolonging the abuses. She cited examples in which Vides sheltered suspected perpetrators and ordered sham investigations. Vides, she testified, told a U.S. Ambassador that a military official accused of killing two Americans and a Salvadoran land reformer in the “Sheraton murders” was “a really good guy.”
Karl testified that in her opinion, Vides' pattern of conduct — which, she said, included his promotion and his protection of known human rights abusers, his failure to inspect and close down torture chambers, his obstruction of investigations, his refusal to dismantle death squads, and his personal visitation of prisoners undergoing torture — constituted active participation in torture.
On cross-examination, Handel asked Karl to comment on passages from U.S. State Department Country Reports from 1983 onward that were favorable to Vides. Handel focused on the U.S. military presence in El Salvador, and read language from the U.S. certification of military aid prepared for Congress. In response, Karl reiterated Ambassador White's assertions that U.S. military training and support failed to stop human rights abuses.
► At the end of the government's case, the defendant moved to terminate, arguing the government lacked reliable evidence. Handel further argued that Schneider v. Kissinger, the 2005 decision in which the U.S. Court of Appeals for the District of Columbia Circuit dismissed a tort case on political question grounds, required dismissal of the government’s removal case against Vides. The judge temporarily denied the motion, deferring a final decision until the end of the proceedings.

General Vides' case
► Vides then called his first witness, David Passage, who had been Acting U.S. Ambassador to El Salvador from mid-1984 to 1986, retired from the State Department in 1998, and is now an External Researcher with the Strategic Studies Institute of the U.S. Army War College. Passage testified that El Salvador saw dramatic improvements during his tenure. He stated that Vides was receptive to change and expressed concern for human rights. However, after a contentious exchange over qualification as an expert, Judge Grim ruled that Vides' lawyer had failed to establish Passage's expertise. The former ambassador thus was limited to testifying on information within his personal knowledge during his two years in country.
On cross-examination, DHS attorney Jim Craig queried Passage about the UN Truth Commission's findings of torture persisting throughout the 1980s, documentation that contradicted Passage's testimony that human rights abuses has been radically reduced in El Salvador. When Passage expressed his disagreement with the Truth Commission findings, Craig produced a declassified diplomatic cable signed by Passage. The cable indicated that during Vides’ term of office as Director of the National Guard at the time of the Sheraton murders, death squads were operating out of the intelligence section of the National Guard. Another Passage cable indicated that under Vides' leadership, the military had not followed up on an investigation into the Las Hojas massacre.
► Vides next called retired U.S. Ambassador Edwin Corr, who explained that he had been brought to El Salvador to “clean the place up.” Corr emphasized his good relationship with Vides Casanova during his posting, which lasted from 1985 to 1988. Corr testified that the alleged decrease in human rights violations in the second half of the 1980s was a result of the U.S. emphasis on a new counterinsurgency strategy. Human rights violations needed to be reduced, he stated, because they only aided the guerrillas.

Upcoming proceedings
With that, the hearing adjourned. The government’s cross-examination of Ambassador Corr has been deferred until May 24, when a further, two-day hearing is scheduled.
Vides also is expected to take the stand in that proceeding.