In Saudi Arabia, apparently, the above depicts a woman behaving badly.
An English-language translation of the commentary in this YouTube video of a 32-year-old Saudi woman driving a car appears in this Al Jazeera English video story, while CNN reports on the detention of this woman, Manal al Sharif, yesterday. Authorities released her only after she complied with a demand "to sign a form promising not to drive again, she told CNN. 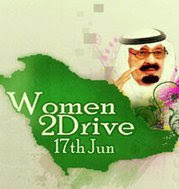 Sharif's a supporter of Women2Drive, a group using Facebook to advocate June 17 as a mass women's driving day. (image credit)