(Anastasia Telesetsky, contributor of today's guest post above, offers this transnational foremother dedication to a woman about whom we've previously posted here and here) 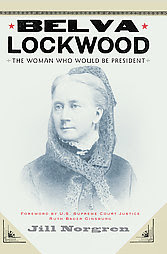 I would like to salute Belva Lockwood, a woman of modest means who through her persistence made a place for women in U.S. law.
At the age of 40, she went to law school. But when she graduated three years later she was refused a diploma, until she petitioned President Ulysses Grant to have her law degree awarded.
After she had tirelessly lobbied for legislation to open the U.S. Supreme Court bar to qualified women lawyers, Lockwood became the first woman admitted to the bar of the U.S. Supreme Court. When she succeeded, she became the first woman to argue before the Court, in Kaiser v. Stickney (1880).
Not content with making waves in the judiciary, she was also the first woman to run a full-fledged campaign to become the U.S. President. She ran in 1884 and again in 1888, even though she couldn't vote. (book cover credit)
Lockwood was also a real proponent of girl's education. As someone who has been bestowed the gift of education, I am grateful to her for her persistence. I admire her tenacity and can-do attitude in the face of social adversity. She is reported to have once said,

'The glory of each generation is to make its own precedents.'

I hope one precedent that this generation will leave for the following generations is a true environmental ethic. While we have our work cut out for us, Lockwood has proven to us the possibilities of applying a little bit of pluckiness to achieve previously unheard-of goals.

by Anastasia Telesetsky at 4:06 AM