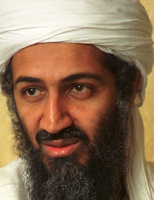 Toward the end of the second week of September 2001, my family and I walked past one of those floor-to-ceiling posters French news magazines use to advertise the week's cover. From beneath a white turban, heavy-browed eyes stared out of a gaunt face with long nose and beard.
Our son exclaimed:

'That is the bad man who killed all the people in New York.'

Our son was 3-1/2 and had just finished his second week at the Paris preschool he would attend all that sabbatical year. He did not yet understand his classmates' language, and we thought we had shielded him from the tragedy that had taken place on Tuesday of that week.
And yet our son knew the essence of what there was to know about Osama bin Laden.
Then 44, the Saudi-born bin Laden led the attacks of September 11, 2001 -- the hijackings of three airliners, which crashed into the World Trade Center in New York, the Pentagon in Washington, and a field in Pennsylvania. Innocents killed on that day numbered nearly 2,700 Americans and almost 400 other persons, from Britain, India, South Korea, Canada, Colombia, Jamaica, Mexico, the Philippines, Australia, Germany, and Italy.
It's reported that over the years thousands more -- 85% of them Muslims -- have died at the hands of al Qaeda, the terrorist network built by bin Laden.
And now bin Laden is dead.
In the televised speech below, President Barack Obama announced just hours ago that following "a firefight," U.S. forces "killed Osama bin Laden and took custody of his body." The "targeted operation" was carried out, on Obama's orders, at a compound in Abbottabad, a city 150 miles north of Pakistan's capital. The President said that no Americans nor any civilians were harmed. (IntLawGrrl Beth Van Schaack's legal analysis of this operation is here.)
The killing ended a struggle against bin Laden that had been waged not only by Obama, but also by his two predecessors. It dated to well before 9/11: As early as 1998, the Department of Justice indicted bin Laden on charges relating to bombings of U.S. embassies in Africa, and President Bill Clinton authorized the CIA to get him. Back then, few knew of al Qaeda or bin Laden. 9/11 changed all that.
Today, bin Laden is dead.
But what of al Qaeda? Will decapitation bring it too to an end? Or has the network, in reality or metaphor, so metastasized that bin Laden's death does little to alter 21st C. geopolitics?
And what of counterterrorism? What next in Afghanistan? If tensions should ease, will a recalibration of liberty and security ensue?
These questions and more we must ponder, even as we grasp for "the sense of unity" to which Obama hearkened.