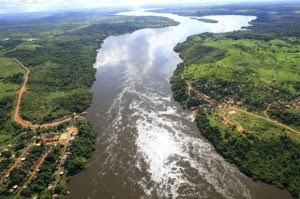 For over thirty-five years, a proposal to build the Belo Monte Dam on the Xingu River in northern Brazil has been fraught with controversy. This week, that controversy escalated to a new level when Brazilian President, Dilma Rousseff ordered an immediate interruption in relations with the Inter-American Commission on Human Rights.
Rousseff's order comes on the heels of a request PM 382/10, issued on April 1, in which the Inter-American Commission asked that the State of Brazil

'immediately suspend the licensing process for the Belo Monte Hydroelectric Plant project and stop any construction work from moving forward until certain minimum conditions are met.'

Those minimum requirements include free, prior, informed, good faith, culturally appropriate consultations with the communities that will be negatively impacted should the project be realized. An estimated 20,000-50,000 people are expected to be displaced in the 190-plus square miles that would have to be flooded to make the Belo Monte Dam operational. (credit for above right photo of site at issue)
The Brazilian government says that the Belo Monte Dam is crucial for development, as it is expected that it will provide electricity to 23 million homes:
► Defense Minister Nelson Jobim said in April that the government would not honor the request of the Inter-American Commission, and he argued that preserving indigenous communities’ way of life should not force 20 million people living in the Amazon region into underdevelopment.
► Senator Flexa Ribeiro, president of the Senate Sub-Committee charged with oversight of the dam project, has stated:

'The request is absurd. It even threatens Brazilian sovereignty.'

► The Foreign Minister has called the Commission's measures “unjustifiable.”
Late last week the Brazilian mining company, Vale, agreed to buy a $1.5 billion stake in the Belo Monte Dam consortium. After significant domestic legal controversy, construction on the dam has recently begun and will cost approximately $17 billion.
This week the Folha de Sao Paolo reported that President Rousseff is “disappointed and irritated” by the Commission's Precautionary Measure request. Ruy Casaes, the Brazilian ambassador to the Organization of American States, was ordered to remain in Brasilia rather than return to Costa Rica. In addition, Rousseff has decided both to suspend Brazil’s approximately $800,000 annual contribution to the Inter-American Commission and to desist from advancing the candidacy of a Brazilian to sit on that body.