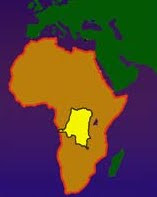 A few weeks ago, I posted about the upcoming release of a new study on rape in the Congo. The report, which collected date for a one-year period in 2006-07, has just been released, and it finds alarmingly high rates. Among other shocking statistics (news headlines are repeating that "1,100 women are raped per day") is the pervasiveness of the problem. High levels of rape occur not just in the major conflict zones but in other parts of the country as well.
Moreover, the study finds that the number of rapes is much higher -- indeed, 26 times greater than the number estimated during the same time period by the UN.
The study, titled "Sexual violence against women in the Democratic Republic of the Congo: Population-based estimates and determinants,"